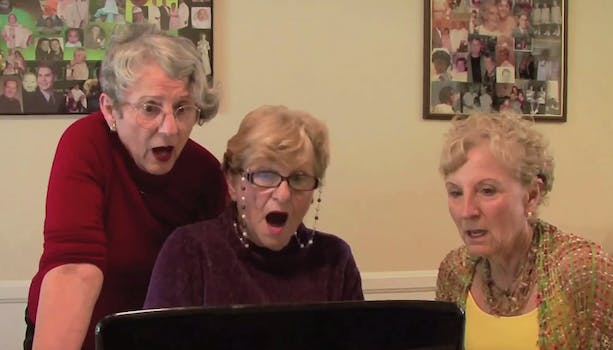 Staged or not, this elderly reaction video is priceless.

Put three grandmas in a YouTube video and it’s a hit within a week. Put those grannies in front of Kim Kardashian’s sex tape and they’re a hit within a day.

Frankly, these ladies deserve the attention. Their performances should be applauded and commended. It takes a hip granny to get down with a sex tape, and these three are about as cool as a 1940s Miles Davis.

But these golden girls might come with a doily-studded caveat. Soon after reaching its 100,000 view clip, speculation began to mount that Herman and the grannies were working off a loose-form script, or that all parties involved are in on the joke.

“This is programming,” wrote ctroncoa in the video’s comments. “Be careful.”

“Why are 3 grandmas just sitting around talking about the Kardashians? seems a little suspicious to me,” wrote express16a18m.

Herman, who made the video but has remained slightly anonymous save for a few A-list cold calls (Tosh.0, Conan, Jimmy Fallon), has not returned the Daily Dot’s request for comment.