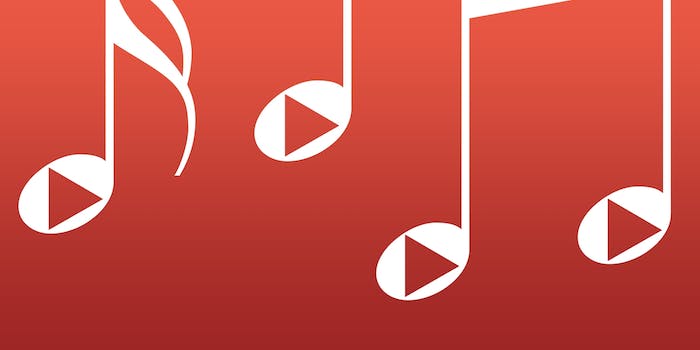 YouTube's refusal to remove 20,000 songs has some of music's biggest names up in arms.

A group of high-profile musicians has demanded that Google remove 20,000 songs from the newly announced YouTube streaming service Music Key or face a $1 billion lawsuit.

The problem stems from publishing rights. According to claims, YouTube has made deals with record labels and many publishers, not with recently formed music rights organization, Global Music Rights (GMR), reports Time. The company, helmed by music executive Irving Azoff, has so far signed 42 musicians to its roster, including Pharrell Williams, Smokey Robinson, The Eagles, and Chris Cornell, among others. The group controls the 20,000 songs that Azoff demanded the platform remove via letter, but YouTube has yet to comply.

Azoff says he’s not at lawsuit stage just yet, but a letter from GMR’s counsel Howard King to YouTube general counsel Kent Walker outlines the company’s grievances and demands that YouTube comply with their takedown wishes, or produce documentation that proves they are within their rights.

“Obviously, if YouTube contends that it has properly licensed any of the songs for public broadcast, a contention we believe to be untrue, demand is hereby made that we be furnished with documentation of such licenses,” writes King.

YouTube may believe it is covered under multiyear licenses from publishing houses like ASCAP, BMI, or SESAC. In the communication from King and Azoff, none of the actual songs or content are named, something necessary for YouTube to identify potential infringing material among the countless hours of content uploaded to the site daily. Instead, it’s a blanket demand for the takedown of the songs under GMR’s umbrella.

In the recent Viacom ruling over Digital Millennium Copyright Act (DMCA) rights, the courts upheld that Internet service providers must have actual knowledge of infringement and must be provided “specific instances of infringement” by complainants. The Azoff letter could be a negotiating tactic to get YouTube to the table to hammer out better terms for his 42 artists.

If the dispute does progress further, the bill could rack up to the $1 billion mark thanks to $150,000 in statutory damages per willful copyright infringement.

“We’ve done deals with labels, publishers, collection societies and more to bring artists’ music into YouTube Music Key beta,” a YouTube spokesperson told The Daily Dot via email. “We’ll keep working with both the music community and with the music fans invited to our beta phase.”