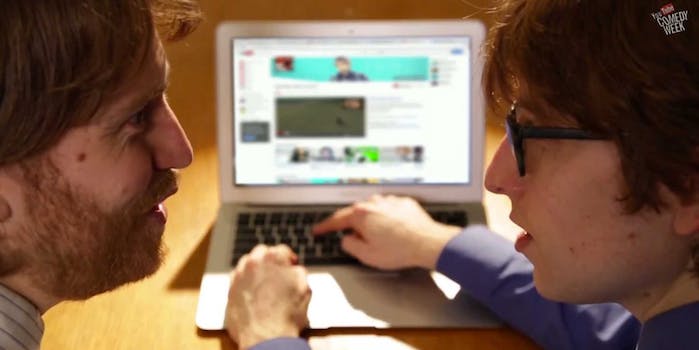 YouTube thinks these are the funniest videos of all time

YouTube has come a long way since it first launched in May 2005, but it’s the older, homemade videos that still leaves the people behind the video-sharing site in stitches.

It celebrated its eighth birthday on Monday in the midst of the first annual Comedy Week, a week-long comedic collaboration between Hollywood and established YouTubers.

The site, which now sees more than 100 hours of video uploaded every minute, has evolved from its humble beginnings to launch projects like the Partner Program and the $100 million Google Initiative. More recently, it launched paid subscriptions.

But there’s one thing they could never have predicted: their audience.

“That’s one of our favorite things about our global audience: you’re as unpredictable as you are creative and irreverent,” the YouTube Team wrote.

YouTube recruited the Gregory Brothers to recap the site’s history in order to mark the occasion, and they captured the overwhelming sensation of what it would be like to discover YouTube for the first time.

YouTube trends manager Kevin Allocca curated a list of what he felt were the funniest videos on YouTube of all-time to mark both YouTube’s birthday and Comedy Week.

Forget the Google Initiative, the paid subscriptions, or the comedic talents being featured this week. The real humor is actually in the older, homemade videos that influenced and made us love YouTube in the first place.

The Lonely Island’s “I’m On A Boat” has the fewest views on the playlist while a 56-second clip of a toddler biting his brother’s finger has been viewed over half a billion times. We also catch a glimpse at the Annoying Orange’s early years, the dance that started it all, and twin speak that showed that almost anything babies do can be hilarious.

Do you find yourself being filmed after getting your wisdom teeth extracted? You can thank “David After Dentist” for that.

And who can resist the charm of a sneezing panda?

There may be funnier videos on YouTube, but these are the videos that we’re still referencing after all these years.