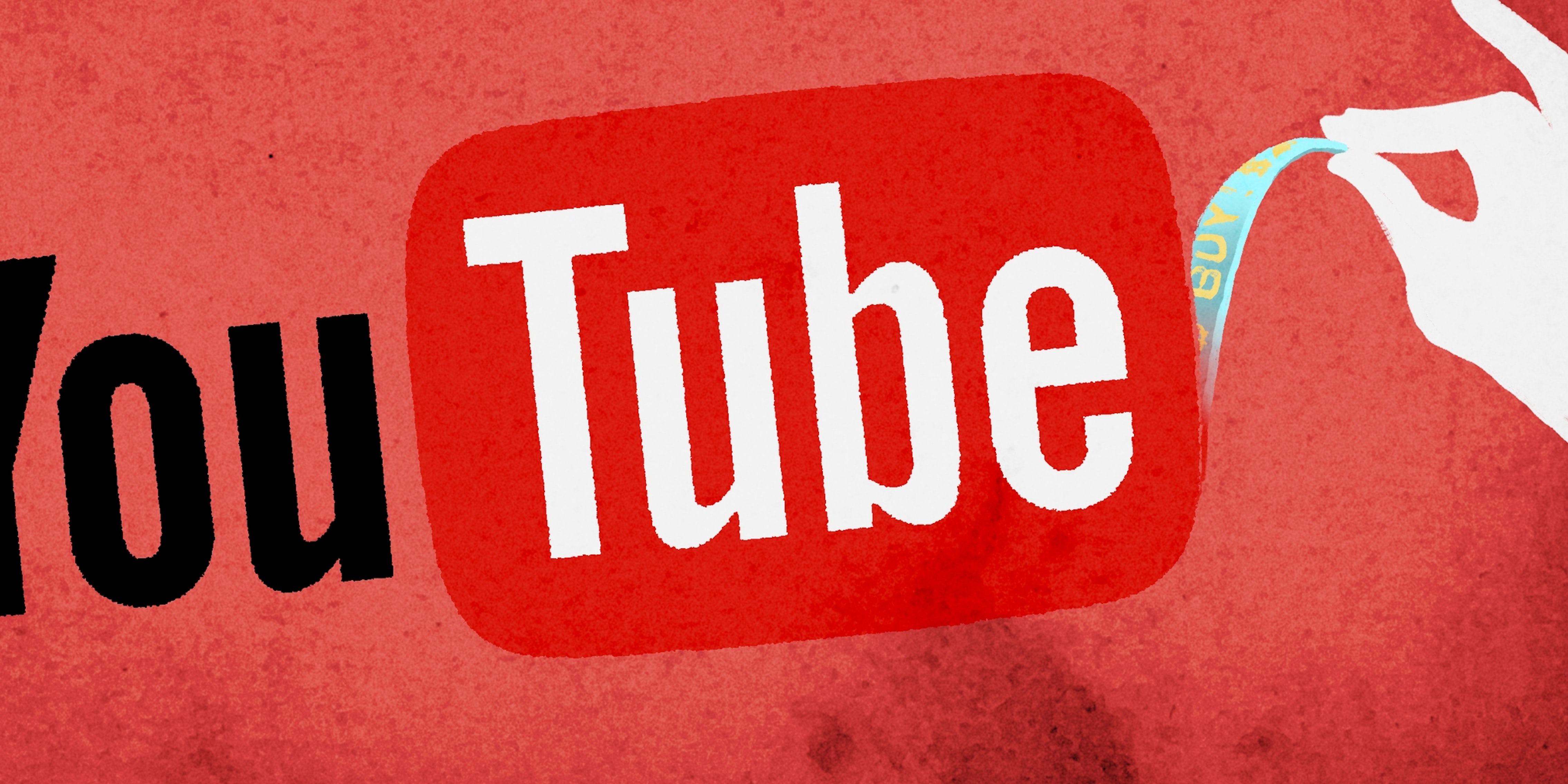 YouTube's demonetization policy is a step in the right direction, but there's room for significant improvement.

In 2012, YouTube began demonetizing videos based on new advertising-friendly guidelines. This was not done by people, but by an algorithm that looked at the metadata of videos and other factors to decide whether it was likely to be something an advertiser wouldn’t want to be associated with.

Over the last five years, this algorithm has regularly removed videos from the pool of advertised-upon content. The algorithm’s parameters were broadened in 2015 specifically to catch more content relating to terrorism.

In blue is the revenue graph of a video that was demonetized in August of 2015. The video began generating a small amount of revenue after the YouTube Red subscription service was launched.

However, it was very difficult to know that one of your videos had been demonetized. If you did happen to notice while very granularly looking at your analytics for a single video, you could ask YouTube what happened, but there wasn’t anything you could do about it.

When your video is demonetized, this little yellow $ shows up.

In the Internet Creators Guild’s initial investigations, it looks as if remonetization (if it happens) is happening in between 12 and 24 hours after a manual review is requested.

Thus, we can say that recent changes have actually been universally positive.

But it turns out that, as it was very difficult to know that a video was demonetized before, many creators were shocked to find that this had been happening at all. Recently, five years worth of demonetized video notifications flooded into creators’ inboxes. When they received these notifications, creators understandably assumed that this had happened recently, not months or even years ago. 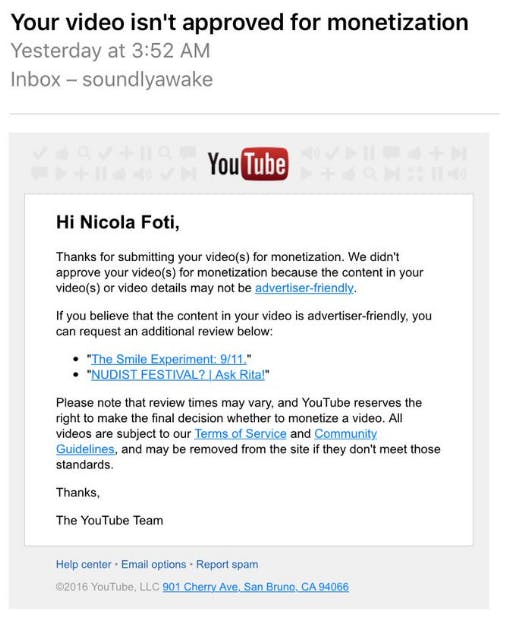 By placing this email in the present tense, YouTube makes it sound as if this just happened when, in fact, it happened years ago. This resulted in a huge amount of confusion.

According to a YouTube representative, overall, less than 1 percent of partner videos have been demonetized, and the appeal process is currently taking around 24 hours with a high rate of re-monetization.

The recent changes have actually been universally positive.

We, of course, know that YouTube has a lot of very difficult problems to overcome. Ad rates have been declining for years as the volume and growth rate of content continue to rise. On the community front, we have noticed some content on YouTube growing less friendly and more combative over the last year, making the website a less pleasant place for many users.

Revenue graph for a video that was de-monetized in 2014. The creator did not know until this week.

So we are sympathetic. Everyone wants the internet to be a less unpleasant place. And the ICG is aligned in finding ways to increase ad rates in order to make careers for professional online creators more sustainable.

However, we have a few concerns.

1) The guidelines seem to be a net that is cast too broadly.

Consider the list of things that may result in the demonetization of a video:

Violence, including display of serious injury and events related to violent extremism

Promotion of drugs and regulated substances, including selling, use and abuse of such items

Controversial or sensitive subjects and events, including subjects related to war, political conflicts, natural disasters and tragedies, even if graphic imagery is not shown

It appears to us that this is a big enough hammer that it could be used to hit all but the most bland of YouTube videos. Guidelines that contain something as broad as “subjects related to political conflicts” do not provide creators with useful information. It makes it sound as if YouTube is no longer going to monetize channels that cover current events, which of course is not the case.

2) Many videos were erroneously demonetized.

Dr. Aaron Carroll runs a channel dedicated to healthcare policy and research and discovered this week that 27 of his videos were demonetized and had been for months. YouTube has now re-monetized all of the videos. It seems likely that the algorithm regularly flagged a program discussing prescription drug costs, the opioid epidemic, and treatments for diabetes because it thought those videos were celebrating illegal drug use.

It is great that YouTube has created an appeals process. But it is surprising that so many videos that obviously should not have been demonetized were and for so long. From initial reports, it appears that a very large percentage of manual-review claims are resulting in remonetization. 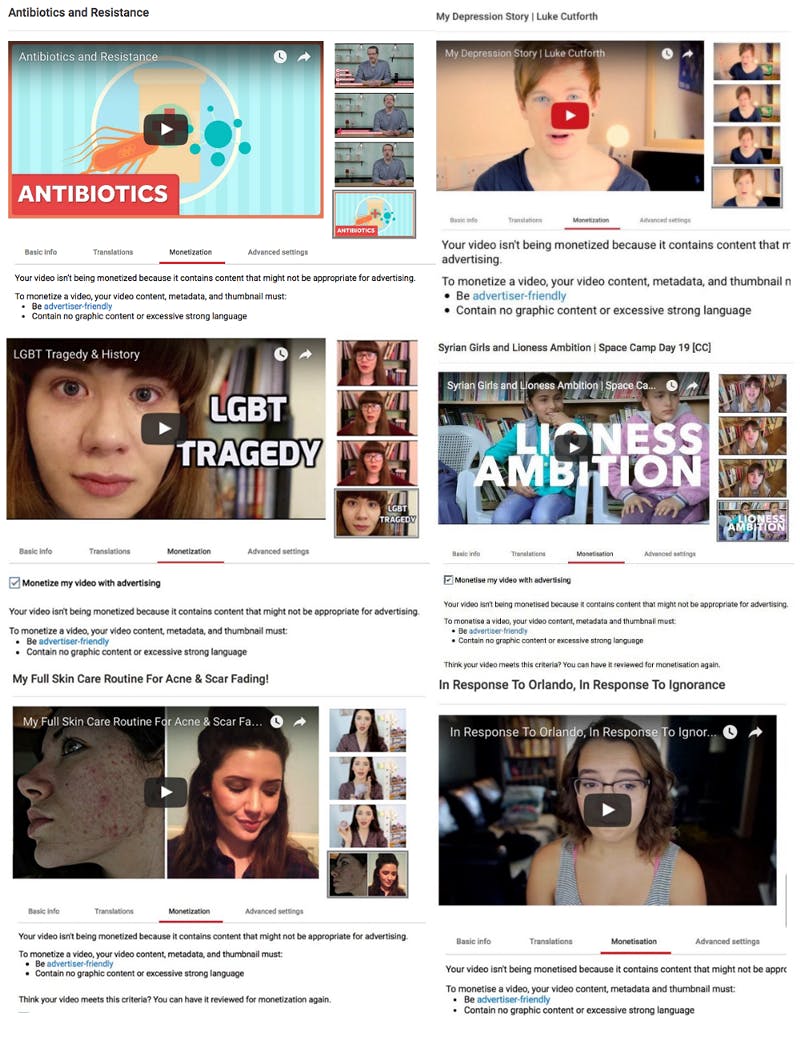 We assume that all of these videos were de-monetized erroneously

YouTube has confirmed to us that the demonetization algorithm checks every new video upon upload and will immediately demonetize a video it flags. Even now that the notification and appeals process is in place, a video could still be demonetized for hours or days after upload while the manual review is pending. That could particularly hit hard at timely or viral content (which often means news-related and sensitive-subject videos).

We hope the appeals process can help YouTube refine this system. In gathering data on videos that creators are submitting for manual review and studying what gets reinstated, the platform has the opportunity to refine the algorithm.

Having to go through an appeals process OR having a video stay demonetized could have the unintended consequence of discouraging creators from making edgy, interesting content. For professional online creators looking to make a living with regular videos that engage their audience, some may rethink the type of content they produce, alter the metadata of their videos, or feel like their content isn’t welcome on YouTube.

The silver lining is that this most recent change in adding a notification and appeals process should help creators. Nothing has changed about the demonetization process itself except awareness of a long-term policy of algorithmically (and often erroneously) targeted videos.

By sharing revenue with creators for the last 10 years while no other social media site has offered similar deals, YouTube has created a vibrant and wonderful content ecosystem. But YouTube also has a particularly difficult job in that tens of thousands of people’s livelihoods depend on it, and so quick reactions and fear are to be expected when big changes happen or are perceived to be happening.

We want to publicly say to YouTube: Feel free to lean on the Internet Creators Guild in the future if and when communication policies change or new features launch. We know creators because we are creators.

The Internet Creators Guild is an organization that supports the interests of people who professionally make stuff on the internet. If you would like to reach us for comment, you can connect with us at [email protected]. If you are a creator and would like to join the guild, you can do so here.