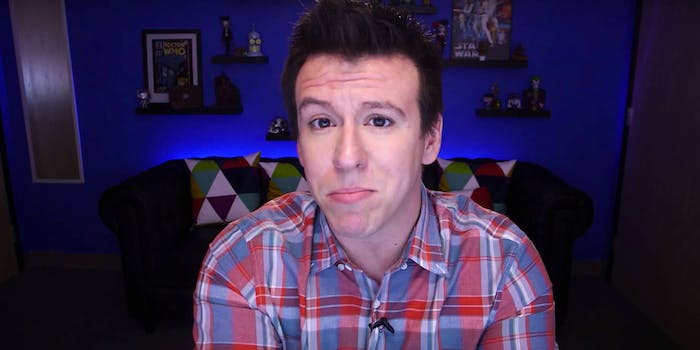 On Wednesday, several YouTube creators posted videos that voiced concerns over the platform’s process of demonetizing videos for not being friendly to advertisers.

Popular creator Philip DeFranco explained that one of his most recent videos, about a “SJW” yelling at a Lyft driver, was demonetized because of “excessively strong language.” While he says he understands YouTube’s right to do this, it’s also “incredibly fucking concerning” and a “form of censorship.”

Reached for clarification, a YouTube spokesperson told the Daily Dot: “While our policy of demonetizing videos due to advertiser-friendly concerns hasn’t changed, we’ve recently improved the notification and appeal process to ensure better communication.”

So while this process of demonetizing isn’t new, it appears the change is that YouTube is making a more concerted effort to actually alert creators when there’s an issue with language or content, and offer them a chance to appeal.

On the YouTube Help page, it states that creators who’ve posted content that’s “not advertiser-friendly” will be alerted directly either via email or a yellow dollar sign in the video manager that will notify them of demonetization. Non-advertiser-friendly content includes sexually suggestive or violent videos; “harassment, profanity, and vulgar language”; promotion of drugs; and “controversial or sensitive subjects and events, including subjects related to war, political conflicts, natural disasters and tragedies, even if graphic imagery is not shown.”

The latter guideline is the one DeFranco took issue with, stating that it’s difficult to do a roundup of the week’s news without touching on such topics. But according to YouTube, that was an existing guideline.

Other creators, like Chris Ray Gun, took issue as well, posting a video yesterday with the goal to “break every single community guideline in the new terms of service.”

The tech and culture channel ETC Show pointed out that while vloggers’ North Korea videos were allowed to be monetized, many of their recent videos have been demonetized and that they “kind of just found out about it by chance.” According to the clip, two of the videos under review include one from early August about the USA declaring war on North Korea, and one titled “Taylor Swift is a F**KING LIAR!!” from July. They also lamented that YouTube has now become a “safe space.”

On Monday, popular YouTuber MrRepzion provided an email from YouTube listing old and new videos that have been demonetized, including a video about depression.

Some people have pointed out that this might be YouTube’s way of dealing with creators who make money off harassing other YouTubers, and in the age of the “social experiment,” the platform has often been lax in going after problematic creators.

DeFranco reassured his followers that even if YouTube goes after his monetization, he’ll still have other revenue streams, but that’s not the case for all creators. As pointed out by Its Becky Boop, another issue is that people who get their news from sites like YouTube are getting filtered news, beholden to advertisers.

As of now, all creators hit with demonetization can do is appeal their videos, as YouTube attempts to “ensure better communication.”