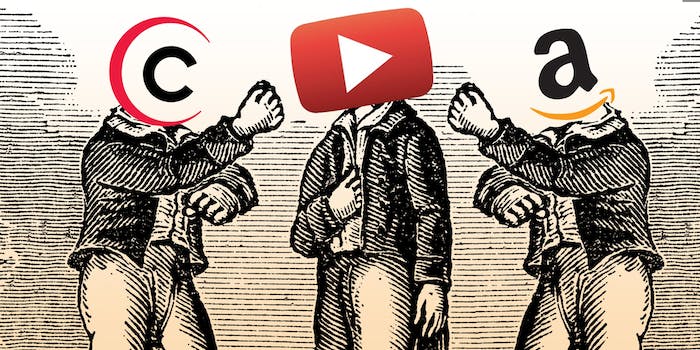 What will it take to direct the future of video?

YouTube has long dominated the digital video scene with established content creators, but with the revenues of digital video growing, other players are taking aim at the longstanding monarch of the medium.

From YouTube’s entrenched position as part of Google, it’s hard to imagine any upstart able to dethrone the king of digital video, but that hasn’t stopped competitors in the past from making a renewed attempt, and for a new crop to consider edging in. Some services have aimed in the direction of studios and networks, creating high-budget entertainment content, such as Netflix and Hulu’s streaming services. Others skewed in the opposite direction, like six-second video giant Vine, which carved its own niche in the market and generated its own conventions, communities, and stars in the meantime.

However, ad revenue is limited in short-form video, so the advertisement-driven grab for video dominance now pits YouTube against new platforms looking for a piece of the pie. Veteran sites like DailyMotion and Amazon are rethinking their video strategies, traditional TV players like Comcast are entering the digital space, and startups like Vessel are trying to break new ground, albeit mysteriously so far.

We explore the new entrants to the digital video space who are looking to either take a chunk out of YouTube’s market share or set themselves apart as alternatives instead of competitors, with an eye toward what it will take to direct the future of video.

The startup by former Hulu CEO Jason Kilar is taking aim at YouTube where it hurts—its creators. The stealth video startup has managed to raise $75 million from investors and is now openly courting content creators on its website. According to a report by the Information, Vessel’s terms are more fiscally favorable than YouTube’s current 55/45 revenue split for creators, plus Vessel offers to pay creators for guarantees of exclusivity to the platform for 30 days.

“If you are a content creator, particularly a video content creator, we should talk,” the site cheerfully exclaims, but it doesn’t offer much more in the way of information on what else will set Vessel apart. Vessel promises more info to come by the end of the year, leaving content creators with a lot of video hours to fill before they can even engage with the new platform.

Amazon is approaching its video offerings on all fronts, with Amazon Studios gearing for the realm of Netflix and Hulu’s original programming dominance, while a newer product, Amazon Video Shorts, aims to ape the success of YouTube, but with a business bent.

Video Shorts so far approaches the video space from a branded perspective, boasting videos from companies like Electronic Arts and Activision. Amazon offers creators a fully rounded environment to share video and sell supplemental materials, so viewers can make purchases within the already robust Amazon interface.

However, the platform has several shortcomings that leave it on an unstable path for YouTube domination. So far videos lack embed features, view counts, and even the ability to follow a particular content creator or brand. These missing pieces are some of the key elements that propelled YouTube’s growth, and if Amazon Video Shorts chooses not to implement these elements, then its chances at usurping YouTube’s power are pretty slim.

Instead of entering the fray from the side of digital, Comcast challenges from a TV broadcast platform. The largest broadcasting company in the world is parlaying into the digital space as a rival to YouTube, building a super streaming site that would feature top-down premium content and a space for user-generated content as well.

Its first foray into the space builds off the diehard fan space where digital companies have already found a seemingly endless desire for continuous content. Comcast has initially inked a deal with Lionsgate for four hours of bonus content from the film Divergent, making it only available to Comcast subscribers. The move, however, pits Comcast more against other paid-content options like iTunes or Amazon than it does with YouTube. Instead of community, Comcast’s first tactic comes like an incentive to purchase for existing customers, not a move that builds a new brand. Putting all its eggs in the fan basket is not the safest choice, since fans are often known for ripping and uploading content that is locked by regional or exclusivity restrictions, making any supposed exclusive potentially meaningless. If Comcast’s intent is to take down the YouTube giant, it’ll have to pivot quickly to a more sustainable model.

DailyMotion isn’t new the to video game by a longshot. The Paris-based video company began around the same time as YouTube in 2005 and boasts 120 million monthly visitors. What it doesn’t boast is a slate of influencers native to the space creating original content, and that’s what DailyMotion is now seeking out. At the end of July, the service announced content partnerships with established brands like AOL, Maker Studios, Epic Meal Time, and Complex.

“Our goal at Complex is to bring our premium original content to the male millennial audience, wherever they are watching,” said general manager of video at Complex Nathan Brown in a press release. “We have a solid following, but partnering with Dailymotion is ideal for aggregating new audiences not just in the U.S., but globally. They have a massive audience, and we’re thrilled to be putting our content on their powerhouse platform.”

It remains to be seen if viewers will flock to DailyMotion for content they’re used to receiving on other platforms and sites. If the offerings aren’t diverse enough, there’s no incentive for users to change their viewing habits, making DailyMotion just an alternative, not the new destination for digital video.

In May outlets began buzzing that Yahoo’s own streaming service would be launched by summer, following their failure to acquire DailyMotion for $300 million. Last month the company acquired a video property, Israeli-based RayV, to help it compete in the streaming space. It’s made fast inroads with its Yahoo Screen offering, snapping up the rights to new episodes of Community after it was not renewed for a new season, and inked a deal with LiveNation to air its concerts daily.

However, so far Yahoo’s plays have been top-down, pulling in marquee names and established content to build an audience. It’s yet to open the floodgates to the everyman or partner with established short-form content producers in the space to build up a community. Yahoo seems keen on sticking to what it deems premium content, keeping the competition firmly in line with the likes of Netflix over YouTube, for the time being.

As these companies moves forward, they’ll each attempt to take bites out of the YouTube giant, but as it stands, none is poised to topple the king unless they can revolutionize the one area of vulnerability—money. The challenge is twofold here: how the platform itself makes advertising dollars to keep the doors open, and how it shares that revenue with top creators on the platform. YouTube has been lauded as one of the only new media sites that shares revenue with its creators, and has made direct investments in content creators in the past—$200 million in 2012—as well as branding campaigns more recently aimed at making YouTube stars into recognizable figures in television ads and on public transit posters.

Still, money continues to be a sticking point for creators looking for bigger paydays, and faced with the reality that stars in other spaces like traditional TV and film are making much more for content that’s being seen by the same number of eyeballs—or in some cases, even fewer. Even with upstarts trying to offer more favorable revenue terms with creators, for now YouTube’s distribution and proven track record gives it a decided leg up in the space. Once another platform cracks the code, only time will tell who will emerge victorious.