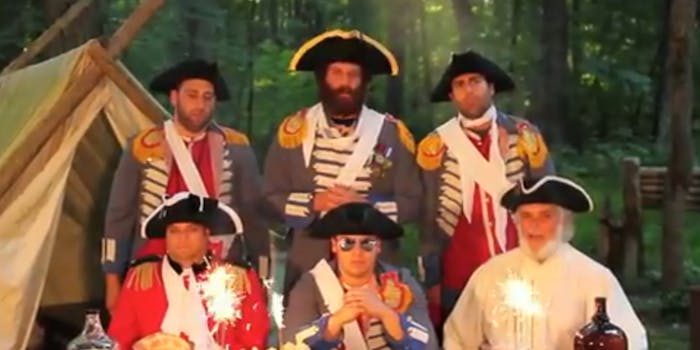 YouTube Guide: A tribute to Bill Clinton and “Meat America”

Tomorrow’s Independence Day, and from New York to L.A., Americans will celebrate their country’s freedom by sitting back, slathering on the suntan lotion, and gorging themselves on some BBQ. The megamouths at Epic Meal Time have your grocery list: bison, deer, “and this rabbit carcass murdered by a flying assassination with a hidden blade out of a tree.”

Nothing screams “America!” like Bill Clinton blowing on a saxophone back in the day at the Apollo Theater. This 666Shitwave666 remix of the classic Arsenio Hall Show clip finds the former president belting out the sax solo to M83’s “Midnight City.” Ray-bans are still in style, huh? Ill Clinton, indeed.

Here’s a fun challenge that’s likely to get even more entertaining with every drink: Try counting the number of alcohol-related puns you can use in a 60-second conversation. Celebrated drunkard Hannah Hart and her buddy Andrew Huang made it all the way to 20 without breaking stride. Of course, they got to script theirs.

It’s one thing for YouTube’s biggest names to team up and spout “Internet Complaints!” like they’re in a star-studded Saturday Night Live comedy sketch. It’s quite another to find British animators piecing together 45-second videos that put a face to every troller’s game. YouTubers are becoming more accountable for the comments they leave. Need proof? UkinoJoe’s video went up this morning, and it already has 133,000 views.

Ed and Judith are headed out to dinner, and who did they leave in charge of the kids? Arnold Schwarzenegger as the Terminator! Ahhnold holds court by blowing away a couple of Jehovah’s Witnesses before ditching out on the kids to deal with Sarah Connor, who he was able to track down thanks to Facebook.