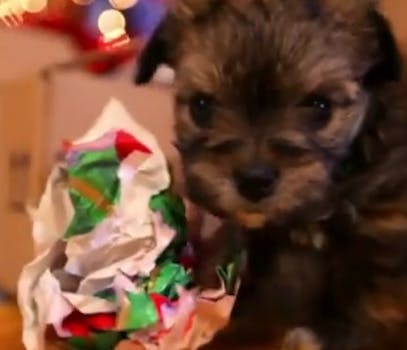 Already shredded through your Christmas presents? Keep the holiday going with these excellent YouTube videos.

Christmas is upon us, and YouTube has gotten into the merriment of the season. Over the last couple of weeks, thousands of Christmas-themed videos have been uploaded onto the video-sharing site.

Here are some of the Daily Dot’s favorites from this holiday seasons’ viral-video rush.

T-Mobile’s “Home for the Holidays” flash mob in a mall outside of Chicago features hundreds of singing ladies in T-Mobile’s signature pink dresses. The video’s collected approximately 3million views.

Improv Everywhere did their own mall flash mob musical in New Jersey around a display for sitting on Santa’s lap. This comedy troupe firmly believes you’re never too old to sit on Santa’s lap.  Birmingham, UK also got their own outdoor mall flash mob, as did Australia. Senior citizens in the United States even made one at a Target in Kansas.

Matt Damon, who plays Santa Claus for some lap-sitters in a mall, wants you to give a water bottle for Christmas. The video, filmed in conjunction with AOL and Water.org, gets hilarious quickly, when the children don’t know who he is—but know Ben Affleck.

Lassi Hurskainen and Dan Jackson did some trick shots with a soccer ball, dressed in Santa suits. They also managed to incorporate a loose story about recovering stolen presents from the Grinch.

Puppies can be a menace, especially when it comes to Christmas presents. Watch them destroy nicely wrapped gifts. They’re so cute, though; how can anyone stay mad at them?

The Calgary Philharmonic Orchestra delighted the Daily Dot earlier this month with their Christmas chorus carol “Singing Tweets” done to the tune of “Lacrimosa.” It’s electrifying.

Top YouTube personalities also got into the Christmas music spirit as well. Tay Zonday recorded a special version of  “Silent Night” and Christina Grimmie, the third most subscribed to woman on YouTube and New Media AMA winner, did a lovely version of “O Holy Night.”

YouTubers also wrote their own songs, like Ryan Higa, whose catchy “Christmas Swag” song and video has been viewed 3.3 million times in two weeks. An offensive original song, created by the obscure and under-appreciated YouTuber MegaJamsStudio, is also worth checking out—if you’re not easily insulted.

Darren Hayes, the frontman of Savage Garden, uploaded a touching, personal video of what Christmas means to him. The three-minute video takes the viewer back to when Hayes was poor and eight years old.