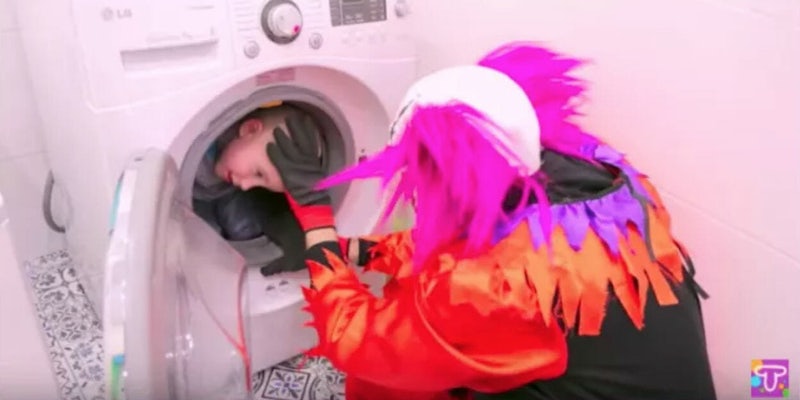 Until this week, webcam videos of preteen girls were easily available on YouTube. They featured singing children, in nightgowns, and were ripe with predatory comments.

The videos were brought to YouTube’s attention at least twice in September. Producer and activist Matan Uziel told BuzzFeed News that “no substantive action” by YouTube was taken despite his best efforts to flag the content.

Until Tuesday, one could also watch a live-action video of a clown kidnapping a child and stuffing him in a washing machine. The “Mister Tisha” channel was verified and monetized, according to BuzzFeed, and boasted more than 1.6 million subscribers. Other clips on this account featured children being attacked by bugs or splattered in fake blood at the dentist.

Another similar channel featured someone in a Joker costume spreading toothpaste on a kid’s face.

YouTube on Wednesday said it’s begun purging these disturbing sideshows and cracking down on channels ripe with harrowingly specific fetishes. The aforementioned accounts were deleted by YouTube following BuzzFeed’s investigation.

“In recent months, we’ve noticed a growing trend around content on YouTube that attempts to pass as family-friendly, but is clearly not,” YouTube wrote on a company blog.

YouTube offered a five-point solution: a tightening up of its community guidelines, blocking inappropriate comments on clips featuring minors, removing ads, bringing in experts to help parse out the bad stuff, and providing more company guidance to its family-friendly channels.

This month a blog post from tech journalist James Bridle sparked press scrutiny of YouTube’s vast, unregulated void of weird videos aimed at children. They featured animation and role-playing adults pretending to be beloved cartoon characters—and they appeared to be exploiting algorithms to generate views.