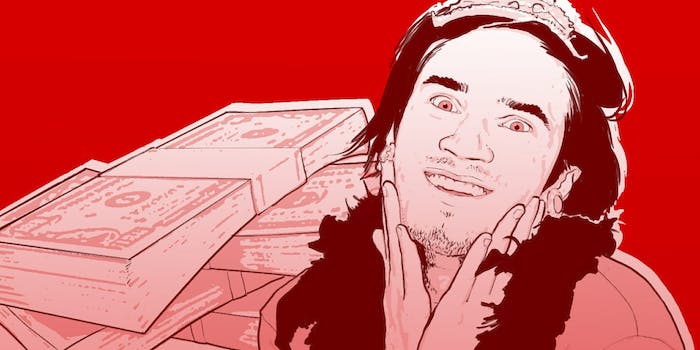 How do YouTubers’ salaries compare to mainstream celebs?

That's a lot of zeroes.

YouTubers have been making careers on the platform for years now, but the actual dollar amount of their take-home pay has remained somewhat mysterious—until now. Forbes detailed the pre-tax, pre-management-fee income for 10 of the platform’s top celebs, ranging from $12 million a year for gamer PewDiePie to $2.5 million for prankster Roman Atwood.

Raking in $12 million a year for quick videos may seem like a lot, but how do those numbers compare to traditional Hollywood celebs? We’ve compared YouTuber salaries to mainstream celebs from the worlds of TV, movies, and music to see just how YouTubers stack up.

PewDiePie’s payout for his 39 million subscribers pales in comparison to A-list movie stars like Jennifer Lawrence, who’s taking in $34 million in 2015, or superstar DJ Calvin Harris, who is estimated to make $66 million this year, according to Parade. However, PewDiePie (aka Felix Kjellberg) tops Mad Men actor Jon Hamm, who is only expected to take in $10 million in 2015.

Many YouTubers, especially the vlogger set, are often compared with television hosts and comedians for their skill sets. Veteran host Jon Stewart was reportedly paid $25-30 million a year for his time on The Daily Show, far above the YouTubers, but his peer (and former employee) Stephen Colbert is much more in range. Colbert will take home $4.6 million for his work on The Late Show, putting him on par with YouTubers like Rhett and Link and British gamer KSI, and under creative duos like Smosh and the Fine Bros., who are each making $8.5 million a year.

Of course, the Forbes list is far from complete. It depended heavily on which YouTube celebs would talk about their incomes; even PewDiePie posted a video this summer talking about why he avoids the subject when possible. Several high-profile creators were also not included, despite having equal viewership numbers to those listed, like the prolific Tyler Oakley or E! host and vlogger Grace Helbig. As Forbes points out, YouTubers make their income from a mix of advertising dollars, both paid from Google directly and from advertisers who hire them for product placements and endorsements. They also often have product lines, subscription services, tours, books, and appearance fees, making the definitive income ranking difficult to tally.

Unlike actors, who have a direct per-project payout, the amount of money a YouTuber can make from a single video (their equivalent of episode) varies wildly. So while Peter Dinklage knows each episode of Game of Thrones earns him $150,000, YouTubers rely on their fans, specific brand deals, and the Google payment algorithm to determine their paycheck.

They might not have reached the heights of the Hollywood payout just yet, but their new model makes it possible for anyone to be the next YouTube millionaire.