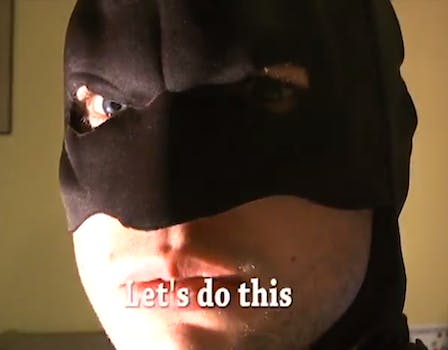 Batman’s most admirable trait: He’s a superhero bereft of any actual super powers. Envious of his influence, British practical joker Robson Thomson opted to race a mile in Batman’s shoes, taking to the streets in mask and cape and cardboard Batmobile.

“It’s not who you are underneath,” Thomson says to two shocked bystanders, “but what you do that defines you.”

Last April, little-known rapper V.i.P. set the Guinness World Record title for Longest Rap Freestyle by spitting uninterrupted bars for a whopping 12 hours flat. It wasn’t very good, but it smashed the previous record, which at the time was held by Chiddy Bang rapper Chidera “Chiddy” Anamega. V.i.P.’s record appears in peril, however; his title is currently being challenged by Christian “Street Light” Grace, who began his quest this morning at 9am PT. When’s Street Light planning to quit his fly? The afterparty’s set for midnight in California.

“So, big news, not really: Anderson Cooper is gay! Gay!” Michael Buckley leads in his most recent episode of What the Buck?!. The pop culture pundit, a homosexual himself, welcomed the CNN correspondent to the club by declaring Cooper a member of “the new gay: the I’m-Just-a-Person Gay, the It’s-Not-a-Big-Deal-I’m-Gay Gay, the I’m-Proud-I-Don’t-Need-to-be-Loud Gay.” Buckley also tackles Tom Cruise’s divorce and Adele’s pregnancy in this Monday’s episode, but let’s get real here: The man’s really excited about Anderson Cooper coming out of the closet.

This week marks Joe Penna’s sixth year making YouTube videos under the guise of Mystery Guitar Man, and he’s celebrating by playing a classical guitar variation of Franz Ferdinand’s “Take Me Out” on top of a computer image scanner. “We’ve got around 400 million hits on all of my videos, over 5 million likes,” Penna relayed to his audience.

“You guys have seen me grow from doing things like stop motion, using household objects to doing animation to doing projects outside of YouTube. We’re excited to take it above and beyond. This is just the beginning.”

It’s a slow week around the My Damn Channel network. The Fourth of July means that everybody’s split for a week at the beach—and you should, too! Fortunately, My Damn Channel Live host Beth Hoyt has some vacation tips to make this sun-soaked week off a little more enjoyable than it already is. You can rock a beach, amusement park, or lay low on a staycation, but make sure that you don’t forget the fireworks. It’s not Independence Day without fireworks. Just don’t be like Beth and try to set them off in the studio.