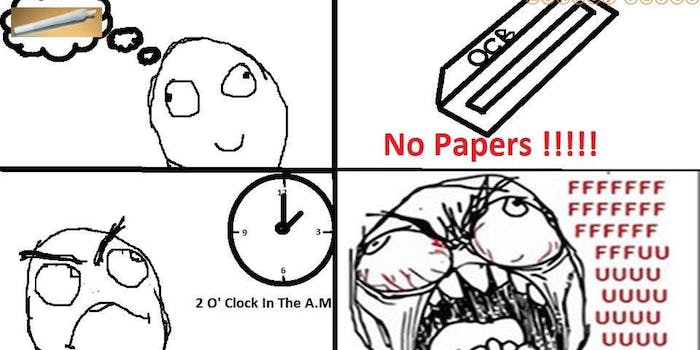 Adrian Chen takes down rage comics once and for all.

So, the New York Times published a long article yesterday about how great rage comics are but I’ve been too busy slamming my head into the side of a parked UPS van to write anything about it until now. So here goes: Fuck rage comics.

Rage comics are a popular meme where people cut and paste a pre-drawn catalogue of cartoon faces into comic strips to create boring stories about the problems they face in their everyday lives. You’ve probably seen one. People on the internet have made millions of these things, the majority of which feature pathetic male leads who get rejected by women they have a crush on for being excruciatingly awkward. What this says about who makes and enjoys rage comics should be enough to explain why rage comics are the worst thing on the internet but I will continue.

Some critics take issue with the fact that rage comics are not ‘original’ or ‘creative.’ It’s true that rage comics, like most memes, are perpetrated by hacks. But unoriginality isn’t their true crime. Quilters are very unoriginal. They’re just quilting shit like millions have quilted before them. But I have no problem with quilters.

I do, however, have a problem with rage comics, which make me want to be lowered on a rope ladder from a helicopter into the blades of another helicopter hovering just below, as only the pain of being hacked to death by a helicopter blade from the feet up would be enough to push any thought of how terrible rage comics are from my mind.

Instead of being actually funny, rage comics perform a sad pantomime of humor by referencing a million internet in-jokes. Men are called “derp,” and women “derpette.” LULZ. Then there are the stupid goddamn faces that make up the actual rage comic format. Rage comics are popular not because they are in any way interesting, but because people (and magazines) use them to show that they are on top of the latest internet “thing,” delighting hordes of internet users who giggle like a four-year-old supremely pleased with himself for recognizing the outline of a rubber duck in a picture book.

Of course, the same could be said about practically every meme that has ever existed, except Princess Beatrice’s hat. That was funny as hell.