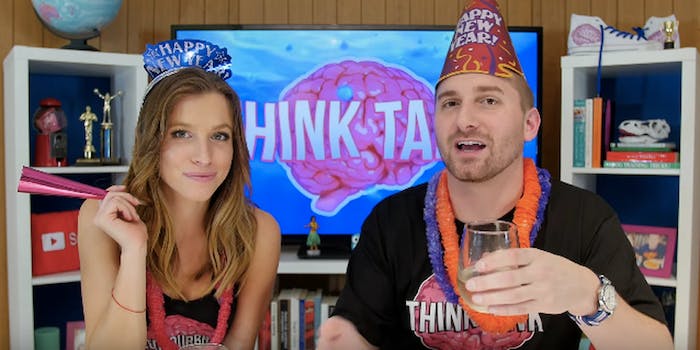 How the Young Turks successfully relaunched a YouTube channel

On Jan. 1, 2015, John Iadarola faced the potential decimation of his YouTube career, all hinging on a single upload.

“Your career could just disappear because you made a decision that the fans kneejerk don’t like. That was a big fear,” Iadarola told the Daily Dot. “I didn’t sleep well near the end there.”

The controversial video? Not a rant on politics or another hot-button issue. It was the announcement of TYT University’s switch to ThinkTank, a new format and style for the established YouTube channel as part of The Young Turks network.

“It’s easy to look at YouTube to see these certain personalities doing so well, these stars of YouTube,” he said. “But there’s a lot of stories of people that fell off or shows that switched up their hosts and their careers were just done. It wasn’t impossible that the entire thing could have cratered.”

Lucky for Iadarola, it didn’t. In the year that followed, ThinkTank has doubled in size, crossing the 1 million-subscriber threshold only 14 months after relaunching.

TYT University launched in 2010 as a college-themed offshoot of the behemoth Young Turks channel. John Iadarola joined Ana Kasparian on the show in 2012, and after she left a few months later to helm another Young Turks franchise, Iadarola continued on solo. But by 2014 Iadarola was itching for change.

“I felt like we’d really covered the really meaty college-focused topics,” said Iadarola. “I was looking for an opportunity to expand the umbrella of what topics to cover.”

The shift from TYT University to ThinkTank is not a complete 180—it’s not going from a gaming vlog to exclusively cooking videos, for example—but instead a progression in the programming. The aim was to give people an eye on interesting perspectives from around the world, exposing them to new concepts and ideas, like they would at college, even if the topic wasn’t exclusively about the college experience.

“There are a lot of people interested in learning about the world who don’t go to college now,” explained Iadarola. “We wanted to create content that we’re interested in and engaged with, but we didn’t want to be constrained by that smaller audience.”

The more stark pivot was in the show’s style, which went from a more TV-like presentation behind a desk in line with the main Young Turks channel to a more vlog-style approach that has Iadarola and co-host and executive producer Hannah Cranston in front of a bright and personal backdrop that they built themselves.

“We did build the entire set with our own two hands, and that makes us more emotionally tied to it and to the show,” explained Cranston, who joined the company in October 2014 as an intern, and became Iadarola’s executive producer and co-host in time for the January 2015 launch.

While the whole shift in programming occurred on a single day to their viewers, the seeds of the change were planted in mid-2014 and required a long process to come to fruition. Leading up to the moment of the switch, fear was the dominant emotion.

“People don’t like change, and it’s scary for both us and our viewers,” said Cranston.

“There was the fear of being discovered because we were being fairly fast and loose with our social media activity,” said Iadarola, adding that it was more concretely, “fear that it wouldn’t be successful.”

To try to appease fans of the old style of the show, they never went in and deleted their backlog. The channel lives as a testament to their history and their future at once—in part because it’s simply a huge backlog of videos to clean out and in part because those videos still generate revenue for the network.

“We never considered deleting videos,” said Iadarola. “It would have been very difficult, and it would have broken my heart.”

They did lose some fans, at first, but they never dipped into negative numbers, recovering what they lost with new eyes. Iadarola and Cranston spent hours in the comments section, playing what they call “smack the groundhog” by trying to allay the fears of longtime subscribers as they reacted to the channel.

“I was ready to release a video I’d done saying it was all a joke,” laughed Iadarola.

He never had to. In addition to the doubling in size and the 1 million-subscriber mark, ThinkTank even hit milestones within the Young Turks organization, becoming the first channel on the network to bring in more subscribers in a month than the flagship main channel.

“There was a lot of buzz going around the studio,” said Iadarola. “No other channel on our network had ever done that before.”

They owe their success to many factors, including an increase in content output under the new format, and the fact that, while they added a new presenter, they still kept Iadarola and his base of fans.

“In my experience, both with ours and watching the experience of other channels as they’ve shifted, I think it’s harder to shift people than it is to shift topics,” he said. “Fans do get scared when people they’re really familiar with leave.”

Another key to success was their ability to stay “super connected” to their audience through the rebrand.

“Leading up to and right after the rebrand, you have to be so enthusiastic and passionate,” Iadarola said. “If people see that you’re excited about something, and they genuinely like you, they should also be excited. It’s like trying to calm down a wild animal. You can’t show fear; they’ll sense it.”

They also learned that some battles are better fought by their diehard fans than the creators.

Now that they’ve crossed the big subscriber milestone, Iadarola and Cranston will celebrate with those fans at an April 7 event at YouTube Space LA.

“That’s where we’ll be popping the Champagne,” said Cranston.

“I could design 10 different shows that would slot well into what YouTube needs, but we like to go out there on the Internet and research stories and get genuinely enthused about these things,” he said. “We wanted to create the optimal environment for that. Every day we find interesting stuff and present it. All the rest [is] just background to us having conversation that we enjoy.”