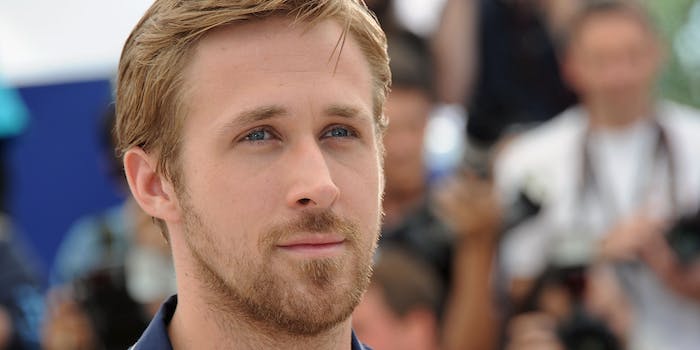 Daylight Saving Time got your head drooping a little more than usual this Monday? Never fear, because here at the Daily Dot, we’ve got just the thing to recharge your sleepless soul: 12-year-old Ryan Gosling dancing in Hammer pants.

That’s right, long before he was a meme, a heartthrob, and everyone’s favorite feminist, Ryan Gosling was a merely a boy from Canada with big dreams and even bigger pants, practicing his choreography moves at Elite dance studio.

By the grace of the Internet gods, Gosling’s 1992 performances were captured on video and uploaded for all to enjoy over the weekend. Better yet, Baby Goose confirmed their authenticity on Twitter:

@RyanGosling We've been reminiscing about my cuz's dancing at Elite… And about your penchant for MC Hammer pants! https://t.co/yOHn9h8M5Z

Obviously I peaked early. Thank you @JaneChupick and twitter for the check up from the neck up.

The first gem that surfaced finds Ryan giving us his jukebox best as he strolls onstage in a boss leather jacket to belt out Elvis’ “Hound Dog.”

The oldies continue as the Gos serves up his best mashed potato dancing to the Contours’ “Do You Love Me (Now That I Can Dance).”

But let’s not stop there. What you’ve all been waiting for is Gosling to bust out his running man in the most lustrous Hammer pants you’ve ever seen.

Still not enough for you? Let’s lose the backup dancers so we can just focus on the swagger of this young man and the shine of his pants.