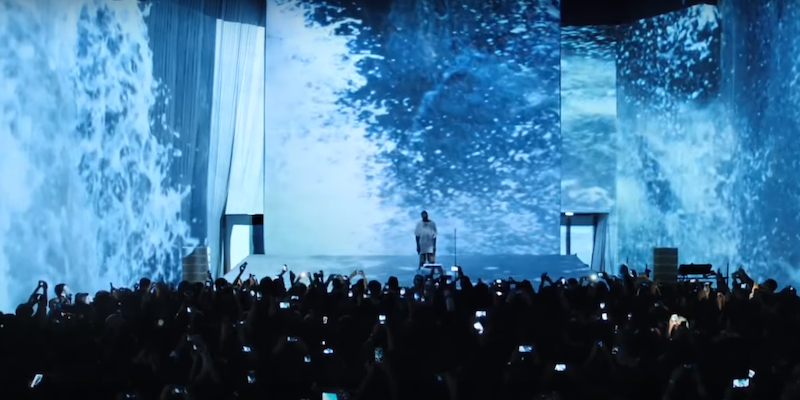 ‘On Sight’ and the hollow heart of ‘Yeezus’

The introduction of a reckless, friendless egomaniac.

“Non-musical. Super aggro. Really noisy… I loved it. It made me crazy.”

That’s how Rick Rubin, whom Kanye West called in at the last second to help polish up the production on 2013 album Yeezus, described the opening moments of “On Sight.” Without wasting a second, this introductory track immediately polarizes listeners—on purpose. “A lot of people hate it—it divides people,” Rubin continued.

Album guest Daft Punk provides a “big modular synth” that radiates in a way that one is not used to when it comes to hip-hop. It’s overly aggressive, and there’s no release. Typically in hip-hop, you’ll get one or two bass drums and a snare drum that keeps you in the rhythm of the song as it goes, but “On Sight” (along with the three following songs on Yeezus) has no snare. You just get low, thumping drums and synths. There are no cuts. There is no musical catharsis.

The most important component of “On Sight” is the immediacy of the track. Playing off the Daft Punk opening that unapologetically catapults you into the world of the character of “Yeezus,” West lets his presence be known.

These lines set up the narrative of Yeezus—an exaggerated version of West that, nonetheless, highlights the very real struggle he had balancing romance, celebrity, and artistry.

This reinterpretation of reality into exaggeration is typical in art. Stephen King never took his family to a hotel where he tried to kill them after losing mind in an attempt to write a novel he couldn’t write. But he was an alcoholic and drug addict. Those demons did distort his humanity and threaten the health of his family. With that in mind, King wrote The Shining as an examination of self, condemnation of self, and attempt to purge and purify the self. Yeezus is no different.

We’re introduced to the Yeezus character as a larger-than-life celebrity, so full of himself that he can have sex with any woman he wants, fight racism and exploitation, and even share a conversation with Jesus.

But Yeezus fails to connect with people through this conceited veil. The persona he’s been wielding as a blunt force has failed him. It cracks, revealing a much more timid and vulnerable man within. Drugs and alcohol will lead him to reflect on the romances in his life that he’s either screwed up or leave him unfulfilled. As part of the hero’s journey, we’ll see West come out the romantic portion of the album and dip back into his Yeezus persona… until he meets “the one”—the woman who could seemingly break him out of his out-of-control lifestyle.

That is the story of Yeezus.

But to get there, the immediacy of “On Sight” is key. In order to contrast the broken soul that tries to find a fulfilling romance in the middle of Yeezus, West starts the album by forcing the listener to experience the headspace of Yeezus in his purest form: He’s loud, proud, and living in the moment—absolutely incorrigible. Fuck what you’ve been hearing and wearing, because West is the king of fashion and music.

And since Yeezus doesn’t have a family or a home that keeps him grounded in the evening, West brings us directly into his “home” as he arrives at the club.

“Soon as I pull up” implies that the party does not start until Yeezus is ready for it to start. Not only is the listener in Yeezus’ headspace, but the world within the album is as well. This narrowed perspective is something persistent and evident in literature and poetry. It allows for “theory of mind” as we co-inhabit the mental space of a person.

Cinema almost always fails to capture this, relying more on imagery and cinematography to make the external world demonstrate the interior of a character. For example, a character who is sad might be shown walking on a dark, empty street. A simple use of form having function. The powerful thing West is able to do with Yeezus is combine the theory of mind literature offers with the form-meets-function of cinema. Cinema emphasizes the visual, and an album emphasizes the sonic.

As West moves from spot to spot throughout the club, we see that he does whatever he wants with anyone.

But therein lies the real point of the immediacy of the song: None of his actions are fulfilling. While the production on Yeezus can be described as aggro and unrelenting, the production also feels hollow and empty. So, while you do have the pounding synths of Daft Punk, they’re mixed in what feels like an atmosphere of dead space. The lack of any snare drums—any catharsis—creates a “space” in the music that is very unusual for hip-hop. On the surface this all seems like the traditional braggadocio one hears on the radio, but the way West has written and produced it indicates none of his actions are lasting and fulfilling.

The term “on sight” refers to instant action. West’s repeated use of “on sight” without any context seems more an announcement of how Yeezus lives. Especially given that the opening goal of most narratives is to establish the values and perspective of the main character(s). Our takeaway then would be that Yeezus wants what can satisfy him in the moment, without consideration of anything else.

Through the first half of “On Sight” we’ve been shown someone that sounds and appears confident and in control… but there is something off about the forcefulness of Yeezus’ expression. It’s enough character building that we understand who this guy is, what he’s interested in, and what his life is like. All we would need next for a narrative is an indication of a plot arc. Of conflict. Stakes. Without those things, there’s no story—then we get to the interlude.

What happens when we reach the exact midpoint of the track? There’s suddenly this warm, gentle music, and a chorus of voices singing:

It’s a wild interlude because, thus far, the pounding synths from Daft Punk have been unrelenting. But everything is stripped away for the choir—it’s this postmodern break that takes you out of the song and provides some direction for the story. It’s the equivalent of an omniscient narrator warning the reader or audience that something is about to happen and that Yeezus will not like it. Yeezus has no idea what’s about to befall him. But we, the listeners, do.

As the album continues, we will see that Yeezus is not happy living the life described to us in “On Sight.” The interlude provides foreshadowing for the album, as what Yeezus thinks he wants or needs isn’t what is best for him. The album is, after all, leading to the final track, “Bound 2,” where Yeezus may have finally discovered true love.

The spiritual tone of “Bound 2” matches the sudden interlude that disrupts the flow of “On Sight.” It’s almost too obvious what West is doing, yet over the course of a 45-minute album, it can be easily missed. This kind of foreshadowing isn’t what most of us expect from an album.

With this reading of the interlude in mind, the listener is cued in on the fact that some bad stuff is about to happen to Yeezus. What follows? A loss of mental and emotional equilibrium, a loss of fame and status and political influence, a loss of ego and hope. Yeezus is broken down to his core. Only then is he able to start fresh.

With that irony setup halfway through “On Sight,” West closes out the second half of the song with more details of Yeezus’ unfulfilling bohemian life:

Everybody wanna live at the top of the mountain
Took her to the ‘Bleau, she tried to sip the fountain

Yeezus then repeats “on sight” several times before the lyrics deconstruct further to a glitch, as he repeats “right now” and “I need” without context. Then the music becomes more erratic and uncontrollable.

This hammers home how much Yeezus is focused on the present out of a rejection of the past and a fear of the future. This clarifies our stakes and sets a direction for the plot. It’s no different than a character in a movie saying, “I don’t know what I’d ever do if I lost my baseball glove.” You know for damn certain he is about to lose that baseball glove.

West has not only expertly introduced the character of Yeezus, but the narrative arc that will bring Yeezus into direct conflict with his past and his future.

Watching the Throne, A Lyrical Analysis of Kanye West is the No. 1 Kanye West podcast on the internet. Travis and Chris have gone line by line, deconstructing the story and themes of over 70 album tracks—with more to come. This amounts to the largest body of scholarship on West’s discography. In 2018, they will release a book on Yeezus that will be the definitive guide to the album.

All episodes are available on iTunes, Google Music Play, TuneIn, and Stitcher.