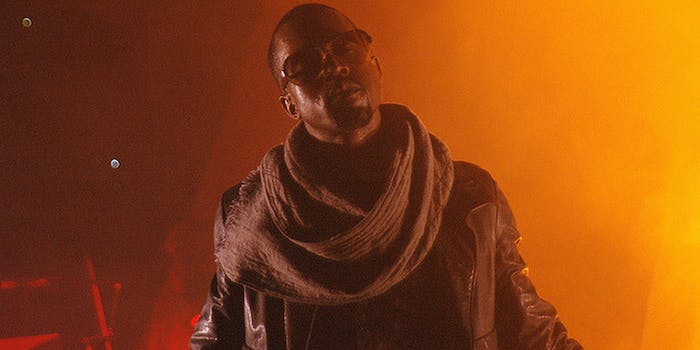 In search of “Yeezus”

On Friday night, we set out as a city to find Yeezus, following a white van around Dallas to pre-chosen locations the Internet told us would host his image.

On Friday night, we set out as a city to find Yeezus, following a white van around Dallas to pre-chosen locations the Internet told us would host his image, as part of Kanye West’s ongoing marketing campaign for his new album, Yeezus.

At Union Station, the first Dallas “stop” of the night, there were video projections on the side of a building for “New Slaves,” followed by an audio clip for “On Sight,” as a young crowd held up cellphones to document the meta-narrative, causing Friday-night bus drivers to look twice. The next “show” at the Majestic Theatre was shut down and the police presence was more obvious. The van carrying the projection equipment was given a warning and told to move on, which sent fans in different directions and caused one Dallas concert promoter to send a message of concern to #Yeezus: 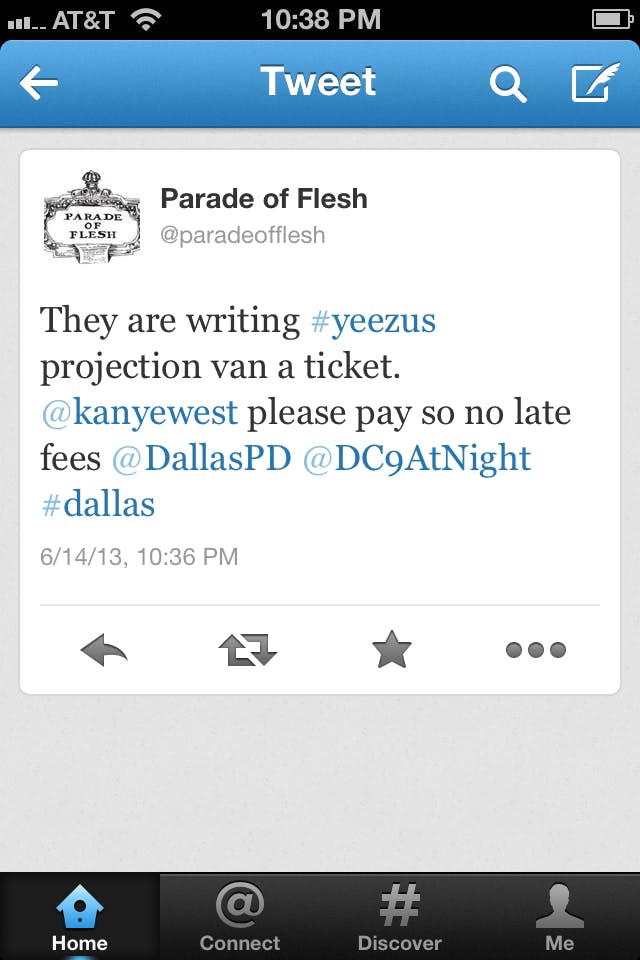 Still, in that real-life Friday-night moment, there were strangers brought together in parking lots, talking to each other about their favorite artist. Elsewhere, in cities like Philadelphia, Chicago, Detroit, Dublin, and Amsterdam, similar scavenger hunts were happening, as they had in weeks before. Now West was riding the momentum from the leak of Yeezus on Friday afternoon. On Saturday, Twitter told us his daughter had been born, which may or may not have been part of this marketing campaign. Kudos to Def Jam for orchestrating such an intricate campaign, though, one in which West is everywhere and nowhere. One in which social media was successful in connecting more than isolating, even if it was just to follow a floating head claiming to be a god across an urban landscape.

This was a gathering of people with similar tastes trying to connect, via social media and in person. As a social experiment that’s proven fairly successful, it’s a sign of what labels are going to have to do to keep people virtually interested in the “event” of an album release. We all want to be part of the Cultural Moment. Add this bit of marketing from Jay-Z on Sunday night: In a Samsung commercial during game 5 of the NBA Finals, he announced his new album is coming out July 4. Samsung users will have 72 hours to preview the material before the masses get to it, no doubt enticing a younger generation of fans to change in favor of cultural allegiance.

That these projections may or may not happen in real life heightens our role as the Greek chorus, as we all weigh in on a moment we’ve been promised will be a Cultural Moment. In a month in which the Internet has been so very leaky, West has found a way to navigate to his advantage.

Meaghan Garvey wrote this excellent piece about West a few weeks ago, after his appearance on Saturday Night Live. In her intro, she posits Chief Keef—whom West introduced to the world via his “I Don’t Like” remix last year—was sold as our “nightmare” of black youth. But with Yeezus a year later, she’s suggesting a different narrative:

“Kanye West is white America’s worst nightmare. Because as much as one may attempt to dismiss him—by calling him an asshole or classless or deranged or various other adjectives that fill the comment sections of literally every article about him—you still have to turn on your regularly scheduled late-night comedy program and stare him in the face. You can’t avoid Kanye. He’s made very sure of that.”

Which is what makes his marketing campaign for Yeezus intriguing. In terms of breaking the fourth wall between real and virtual projection, he’s redefined what it means to have followers.