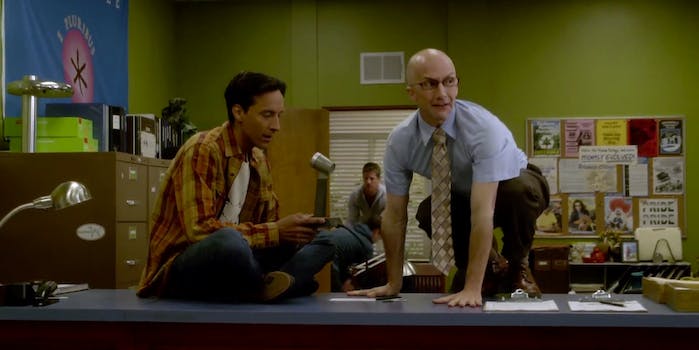 ‘Community’ season 6 is back on—thanks to Yahoo

Now we're only one step away from that movie.

Now we’re only one step away from that movie.

Yahoo just came out of the woodworks in the eleventh hour and picked up Community for a 13-episode sixth season just hours before the actors’ contracts expired, TVLine reported.

Before the announcement, Yahoo seemingly wasn’t even part of the conversation, but it had expressed an interest in making original content for the Web earlier this year and picked up its first two shows in April.

And a tweet from creator Dan Harmon shortly before the announcement created more questions than answers.

It’s been so long since I’ve seen the young maiden. My love is stronger than my fear of death. #SixSeasonsAndAMovie

Cancelled last month by NBC, fans rallied for an online streaming service (most notably Netflix and Hulu) to save the cult show from the Darkest Timeline. Earlier this month, Hulu had started discussion with Sony Pictures Television, the company that produces Community, but those talks fell through last week; still, Sony remained optimistic about shopping the show elsewhere. The company had until July 1 to find a new home before the cast would be released from their contracts and free to do other things.

Yahoo is likely betting on Community’s built-in audience to follow the show to its streaming service, which doesn’t yet have the clout of Netflix, Hulu, or Amazon Prime.

Harmon will be returning for the sixth season, along with stars Joel McHale, Gillian Jacobs, Alison Brie, Danny Pudi, Yvette Nicole Brown, Jim Rash, and Ken Jeong. Longtime executive producer Chris McKenna is currently in talks to return as well. TVLine confirmed that Donald Glover, who left in the middle of Community‘s fifth season, will not return.

“I am very pleased that Community will be returning for its predestined sixth season on Yahoo,” Harmon said in a statement. “I look forward to bringing our beloved NBC sitcom to a larger audience by moving it online. I vow to dominate our new competition. Rest easy, Big Bang Theory. Look out, BangBus!”

Some fans may be wary about the show going to Yahoo (remember season 4?), but for what it’s worth, Harmon and the cast remain optimistic as they tweeted out support.

“‘The reports of our cancellation have been greatly exaggerated.’” McHale said as he reworked a quote by Mark Twain. “#SixSeasonsAndaMovie is real. Thank you Sony. Thank you Yahoo. Thank you Dan Harmon.  And thank you to the greatest f%$#ing fans in the history of the human race. It’s the internet. We can swear now.”

At least that asteroid didn’t destroy all of human civilization—and that’s now canon.