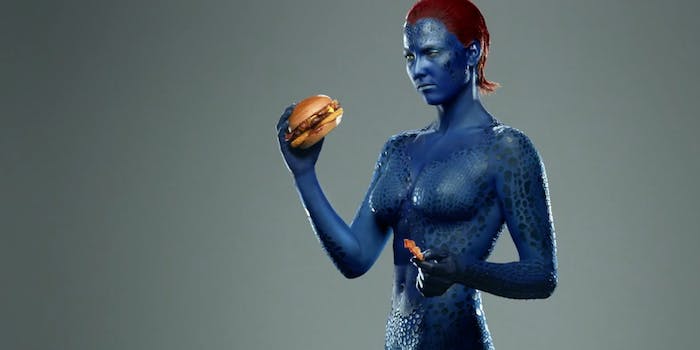 Amazing Spider-Man 2 featured an unnecessary number of advertising tie-ins, but it looks like the new X-Men movie is going to give it a run for its money.

While Spider-Man wound up playing a dancing baby in a truly embarrassing Evian commercial, we’re assuming it wasn’t the real Andrew Garfield inside the Spidey Suit. The cast of X-Men: Days of Future Past weren’t quite so lucky.

Mystique (played by an unknown actress, presumably because Jennifer Lawrence refused) filmed a Hardees ad so pointlessly sexist it might as well have been penned by someone from Mad Men. She literally has to shapeshift into a dude to eat that bacon burger, because Mystique is simply not man enough to manage it.

Then, from the other side of the bacon burger gender divide, there’s this commercial in which Quicksilver uses his super-speed to… catch pieces of bacon when they fall out of his sandwich?

The weird thing here isn’t so much that these commercials exist, but that the concept around them is so blatantly nonsensical. Surely there’s a more appropriate X-Men related product than Hardees? Leather jackets, perhaps? Or beer, for Wolverine? Sadly, the movie’s other product tie-ins are equally embarrassing. Just check out this Axe commercial, in which Havok and a couple of extras act out an incredibly stilted scene at Professor X’s school for mutants. It’s honestly not clear how this is supposed to persuade us to buy Axe products, particularly since the ad never explains which character is wearing Axe, if any.

Finally, there’s the “limited edition” X-Men: Days of Future Past Twinkies. Someone at MTV has taken the time to review them, but for those who don’t actually want to ingest any mutant Hostess products, you can just marvel at the packaging on their Facebook page.

Is the X-Men: Days of Future Past audience meant to be made up of people who chow down on a hearty meal of Hardees burgers and Twinkies, before dousing themselves in Axe body spray and going to the movies? According to these marketing campaigns, apparently so.