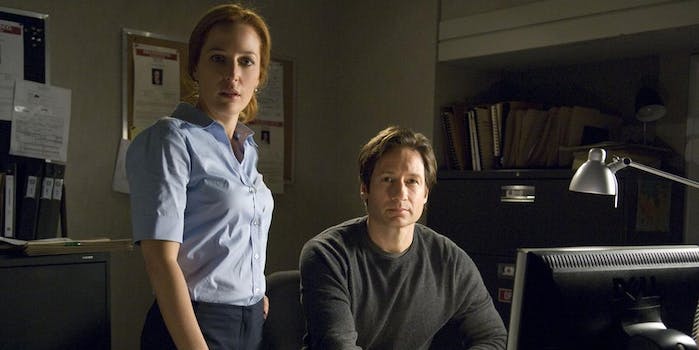 Believe it: ‘X-Files’ is coming back to TV

Years of wondering “Will they or won’t they?” are over: The X-Files is finally coming back to Fox.

In a press release, Fox CEOs Dana Walden and Gary Newman explained: “The X-Files was not only a seminal show for both the studio and the network, it was a worldwide phenomenon that shaped pop culture—yet remained a true gem for the legions of fans who embraced it from the beginning. Few shows on television have drawn such dedicated fans as The X-Files, and we’re ecstatic to give them the next thrilling chapter of Mulder and Scully they’ve been waiting for.”

Yes, Gillian Anderson and David Duchovny are also on board for the six-episode reboot of the ’90s sci-fi show. There were concerns that their schedules might not allow for their participation; perhaps this short run is accommodating those conflicts.

Creator Chris Carter added that after a 13-year hiatus, “The good news is the world has only gotten that much stranger, a perfect time to tell these six stories.”

Between this and the Twin Peaks reboot, it’s a good time to be a fan of ’90s cult weirdness. The show is scheduled to start production this summer.