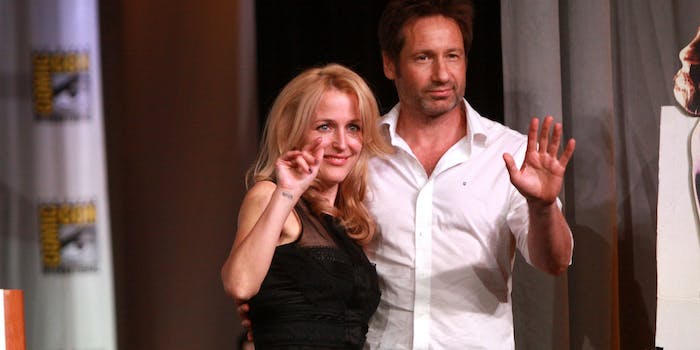 The smooch is out there.

Mulder and Scully are making The X-Files fans sweat after Tuesday night.

As fans anxiously await the return of their favorite sci-fi conspiracy series, David Duchovny and Gillian Anderson reunited for a special performance Tuesday night at the Cutting Room in New York. Duchovny performed songs from his new folk-rock album, Hell or Highwater, and invited Anderson to the stage for a rendition of Neil Young’s “Helpless.”

The band was better than I expected. Even a quick listen to Duchovny’s album proved to be better than I had anticipated. In fact, if you told me Hell or Highwater was a new Tom Petty cut, I’d probably believe you.

At the end of the song, Duchovny gave his costar (and once-rumored girlfriend) a hug and a kiss on the lips, as adults do. Naturally, fans of the famous and fictional partnership set the Internet ablaze in speculation and swoons.

But watch the video again. There’s something amiss about the kiss. Notice how Duchovny keeps creeping up on Anderson during the song, singing at her, whispering to her during instrumental breaks. This only happens a couple of times, but if you look carefully it’s there. When Duchovny finally leans in for the kiss, I noticed some hesitation from Anderson. To me, though, Duchovny gives off a creepy uncle vibe, giving new meaning to the name, “Spooky Mulder.”

After rumors of the two actors dating surfaced in 2014, Anderson denied the two were in a relationship in an interview on HuffPost Live. “It’s a nice idea, but it’s never going to happen.” She elaborated that the two became close during the ninth season of X-Files, but they never became that close. Any attraction that exists between the two, Anderson said, “continues to make [the series] interesting.”

It sounds like Anderson and Duchovny are friends to the end, but it doesn’t change the fact that Mulder came off as the overly affectionate friend on Tuesday night.

The X-Files is scheduled to return to FOX for a six-episode run in January.