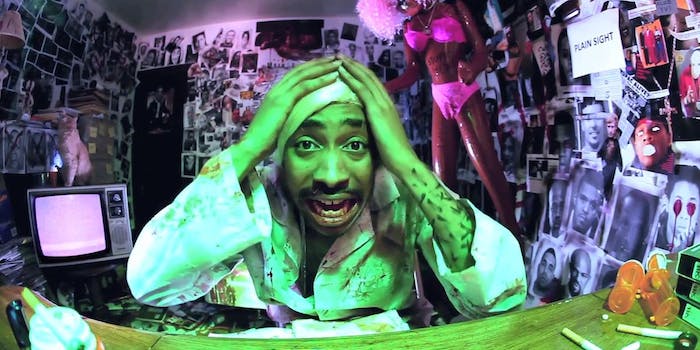 You won’t believe what this mysterious government whistleblower was promoting

A whistleblower who promised to release information on a sprawling government conspiracy to control the population through hip-hop music has been revealed as an actor in a viral marketing campaign to promote a new rap video.

The campaign began on 4chan’s paranormal imageboard /x/ early last week when former Department of Defense operative Robert Connors posted a shoddy YouTube of him explaining “Operation Sedgwick,” the alleged hip-hop mind control initiative. At the end of the video, the image cuts to black as an alleged recording of Michael Jackson’s final phone call before his death plays.

“The majority of shit on /x/ is bullshit, at least this has some basis in reality,” one anonymous /x/ user wrote last week. “I’m not going to just choose ignorance for no reason when all I have to do is watch this story.”

Connors also promised to release more information today. At about 1pm, he made good on his word (it gets good at 00:35):

As it turns out, “Connors” is an actor named Shane Schultz, promoting a video called “WHO KILLED HIP HOP” for Prince EA, a St. Louis-based rapper.

Some will love me….some will hate me…I Love you all though :)

The fake government conspiracy was perfect bait for /x/, an imageboard whose members obsessively investigate the strange and the paranormal.

Sometimes their investigations pan out, as in the case of Pronunciation Book, a three year old YouTube channel that suddenly went off the rails 2 and half months ago. The channel has released one new video a day counting down to a big reveal to occur Tuesday, and /x/philes were the first to spot it.

But they can’t all be home runs. Perhaps because of the similarities between “Operation Sedgwick” and actual government programs like COINTELPRO, or perhaps because they wanted to believe, many on /x/ bought into it.