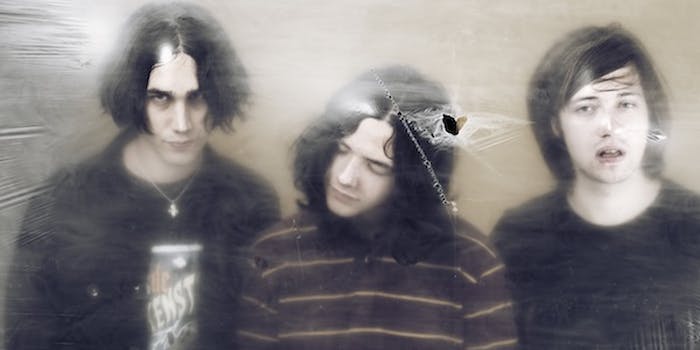 The extreme sides of the Wytches: A Spotify playlist

In Spotify Essentials, the Daily Dot curates custom playlists created by some of our favorite artists and writers. In this installment, the Wytches guitarist/vocalist Kristian Bell breaks down the band’s key influences.

Like a lot of people who feel a genuine connection with music, I like to listen to songs that fit or erase a certain mood. It seems like quite a standard way of describing why someone would enjoy music, but that’s how it is for me. I guess my ‘thing’ with music is the extremes—soft and heavy or light and dark. When I dreamt up the Wytches, I imagined it being a split of the two. I felt like I would be neglecting my equal interests in well-crafted, beautiful-sounding songs and aggressive, sloppy tunes. I guess this playlist shows that contrast.

When we first started this band, we didn’t share a great deal of musical interests. A lot of touring has brought us together musically, bringing a long our favourite albums to listen to in the van and all that. “Talking Hava Negeilah Blues” was a big one on this last tour. Its such a funny song. Anytime things got a bit heated in the van, i’d just play that song. It became a ‘thing’. You’d have to listen to it to realise how uplifting it is in its humour. A lot of really early Bob Dylan is comical genius.

A good 50 percent of our live show consists of songs that are a few years old now. We’re always in danger of becoming terribly bored of some of those tracks. I’ve found that listening to music that is so far from our genre is a good way of refreshing our ears. A musical pallet cleanser, if you will. The Born to Die album by Lana Del Rey seemed to be a secret favourite for Dan and I. We had never discussed it;  we just found it in each other’s collection.

I’m unheathily obsessed with both Bright Eyes and Elliot smith. Gianni claims that he can’t stand them both, but I think that he just says it for effect. They are two of the biggest influences on my songwriting, so I find it so strange how boldly we disagree. Without sounding all conceptual, it says something about our band’s dynamic. I’d like to say it brings closer together but it doesn’t.

The Wytches debut album is due spring 2014 on Partisan Records. You can listen to “Wire Frame Mattress” on Soundcloud and catch the band at SXSW:

Photo via the Wytches