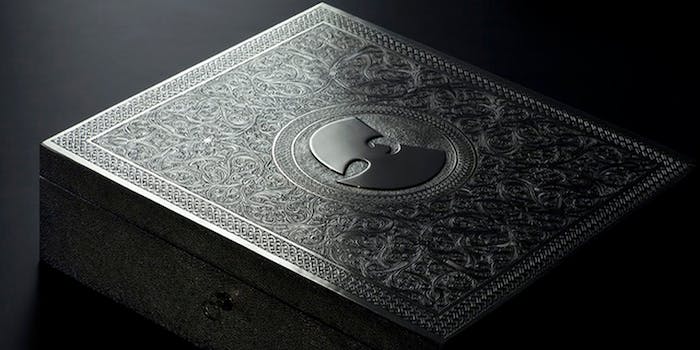 Do you believe in life after Wu?

Apparently, Cher is down with the Wu-Tang Clan.

The group’s “secret” one-copy double album, Once Upon a Time in Shaolin, will be making the rounds soon, visiting museums and galleries as a rare 31-track artifact that will be sold to one very wealthy person. The crowdfunding effort to purchase the album is currently at $15,000.

Forbes reporter Zack O’Malley Greenburg recently travelled to Marrakesh, Morocco, to interview the album’s producer, Tarik “Cilvaringz” Azzougarh, and christen the album as the first “civilian” to hear it. Forbes posted a video of his journey, which included an in-studio listening session, and a 51-second snippet of one of the tracks, which went unnamed, featuring Ghostface Killah rapping over a trademark Wu beat. Towards the end, you can hear … Cher.

According to Rolling Stone, a rep confirmed that Cher is indeed on the album, credited as “Bonnie Jo Mason,” a pseudonym she also used for 1964 Phil Spector-produced single “Ringo, I Love You.” A rep also confirmed that she recorded her vocals on two tracks separately, so there was no “direct interaction.” Bonnie Jo Mason was actually credited on the album’s website, as were “FC Barcelona soccer players.” How Cher came to be down with the Wu is still a wonderful mystery.

The album, six years in the making, is so secret, members of Wu-Tang themselves allegedly didn’t even record their vocals over beats related to the tracks, and no one in the group received a copy of the album. Wu-Tang Clan were recently discovered to have a larger vocabulary than Shakespeare, which makes anticipation for this album pretty high.