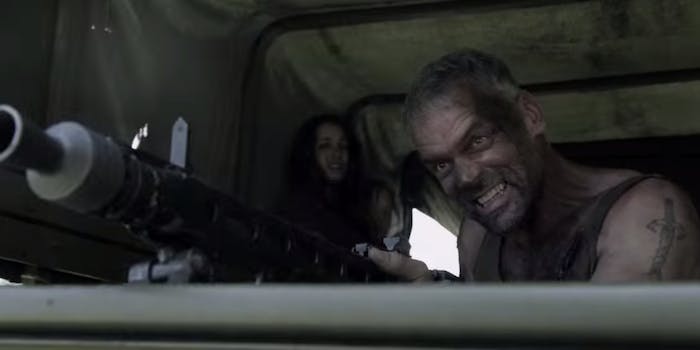 The 5 worst war movies on Netflix

OK, one of them is actually good.

When we decided to do a pair of war movie roundups for Memorial Day, our own Michelle Jaworski was supposed to take the bad movies—but I begged her (well, I asked her) to take the good ones instead. I can’t be reverent; it makes me nervous, which usually makes me laugh. I swear I’m not a monster—my brain just takes sadness and redirects it everywhere that it’s not supposed to go.

Also, I might legitimately prefer watching shitty films to good ones. Aside from sadness making me uncomfortable, I’m not sure that I even like good movies anymore.

The following are the war-related films with the worst IMDb ratings that are currently streaming on Netflix. Most of them were made for around $3 million, which is a completely absurd number for either a period piece or a war film, and most of these are both.

Read on to find out which of these bad movies made me feel things.

You know a movie’s going to be good when it opens with voiceover and a black screen, then reveals its title via an embossed, white arial font. The sequence in question involves Marines risking their lives to unload a truck full of Gatorade and water while dozens of Taliban fire upon their outpost. Eventually, somebody’s leg is blown off (the gore is not held back) and everybody crowds around the soldier while he has some dying words. Everybody who dies in this movie gets to have a death speech—this film generally receives low marks in the realism department.

Speaking of which, my favorite unrealistic scene is when a soldier is dying in a poppy field (which is a corn field with a few poppies planted by the art department), and another soldier squeezes poppy juice into his mouth to ease him into the afterlife. First, you have to lance poppies and let them bleed out latex over an extended time, and that latex is relatively weak and generally processed to become opium, because eating the latex takes about two hours to kick in. Second, Marines tend to have morphine on them, so deciding to squeeze poppy juice into a soldier’s mouth when he’s going to die in two minutes, instead of giving him a morphine injection, is just a major dick move.

That said, the movie probably deserves better than its 5.5 IMDb rating. It has a lot of heart, and it’s shockingly low on xenophobia. The action is fun, if not complete nonsense, and a couple characters are even treated to a Butch Cassidy fate at the end—I’ll take all the Cassidy nods that I can get.

Do not expect this to have anything in common with the original Jarhead, other than the fact that it involves the military. It’s not even the same fucking war. But if you’re looking for a good B action movie while curing a Sunday hangover, then the dialogue, characters, action, and heart here will do you right.

Allies looks like one of the Asylum’s period pieces, and the action looks like somebody filmed a war reenactment and added CGI blood to it in post. It has no sense of geography—a dude will just seemingly teleport behind a Nazi and slit his throat with a knife, which is admittedly cool, but also stupid.

The plot: Yanks and Brits have to team up to go behind enemy lines and retrieve some maps, and they don’t like each other, but then they eventually do, because war brings people together (and because a movie needs an arc).

Overall impressions: The CGI planes in the movie look good. (I can’t actually remember them, but that’s in my notes, so it’s probably true.) The acting is really great for a low-budget film, but the ending suddenly turns into Commando and there’s a twist that’s hard to give a shit about. Like Jarhead 2, this one will pair well with your hangover, and deserves a slightly higher rating than its current 5.0.

I think this film’s 4.5 rating is quite generous. The credits are headlined by Tom Sizemore, and the cover on IMDb shows him aiming a gun, but he’s actually in the movie for about seven minutes and most definitely never holds a gun. Those seven minutes are spent back at HQ as he looks at goofy CGI computer screens and is constantly upset at the mission (and probably about having to work on this film).

Some things I learned about Navy SEALs: “Curveball” is strategic slang for throwing a grenade at something that’d be way easier to just shoot. “Cover fire” means that everybody runs forward at once and wastes tons of ammo by blindly shooting forward. To kill a Navy SEAL, you have to hit him square in the chest with a rocket launcher, which results in the other SEALs being sad around a gigantic blood splat that looks like something from Quake II.

The main reason this death is so funny is that the film goes to such great lengths to prove that SEALs are invincible, with them doing so many things that should get them killed that when you see a slo-mo rocket fly 100 yards and hit one in the chest, and they explode, you have to laugh at it. Without the slow-motion shots in this movie, it’d be 18 minutes long.

The end turns into some weird version of Dredd and The Raid, with the whole city of Johannesburg turning against the main SEAL, chasing him around with sticks and brooms and whatever shit they can find while he attempts to infiltrate a tower to stop some yellow uranium cake from being sold. Or something. I rewound it and still couldn’t figure out why the whole city turned against him. Oddly enough, that whole scene looks like it must have cost millions of dollars to coordinate and shoot—in fact, much of this movie looks like it was super expensive. There’s a probably a reason that neither the budget nor earnings are listed on the IMDb page.

Fun fact: This is also known as Behind Enemy Lines: SEAL Team Eight, because it’s technically the third film in the Behind Enemy Lines series, but the name was presumedly switched around when somebody realized that most people don’t remember the original film even exists.

This film actually was made by Asylum, because Fury came out and they needed to release their version of it, which is why the cover features a tank rolling over rubble, its turret aimed right in your face. While there are some tanks in this movie, the main protagonists leave theirs in the first 15 minutes to go off on some mission.

The tanks are mostly in the form of shitty CGI, although there are certainly a few real tanks involved, which makes me wonder just how picky the military is about letting people use their priceless WWII vehicles for film projects.

You could remove the tanks, put a bit more time and effort into the production, and you’d probably have a pretty damn good movie here. As it stands, though, even the stock footage that opens the film seems to be the most boring WWII footage possible.

Things I learned from watching Fury, er, Ardennes Fury: When you’re refueling a tank while under massive Nazi fire, it’s best for the whole crew to not only exit the tank, but to stand in front of it while talking and studying a map. Also—and this applies to most of the movies on the list—it’s always a good idea to fire tank rounds at single soldiers. Yes, the tanks have guns on them, and those explosive rounds are expensive and very limited in number, but sometimes you just want to be certain that you’ve gotten the bastard. Evidently, all Nazis speak perfect English, and—despite what common sense might tell you—have Russian accents.

With all those hateful things said, even with its dismal IMDb rating of 2.1, I’d still recommend it for nursing a hangover. Honestly, I’d recommend all of these movies for hangovers. They’re great for distracting your brain, and none of them require you to actually use it. Except the next movie, which I genuinely liked.

This one has a 4.9 rating on IMDb, and that’s just not fair at all. For a movie that’s about 70 percent CGI and had a budget of just over $3 million, the dog fights look pretty damn good, the acting is fantastic, the story (and its arc) are great, and the action is tense as hell. Plus, there just aren’t that many movies about B-17 Bombers and just how extremely dangerous and generally mechanically shitty they were. When I say there aren’t many movies about B-17s, I need to admit that I haven’t actually looked into that claim whatsoever—I’d just wager that the ratio of D-Day to B-17 movies is around 6,000 to 1.

When I say the CGI looks good, I should specify that it’s Game of Thrones good. When you see a city in GoT and immediately know that shit’s fake—but you don’t care because the story is awesome—that’s what it feels like when you see this film’s big aerial shots of the military camp.

This movie also gets extra props for not holding back on the gore. Flying those oversized VW Buses through huge clouds of exploding flak and fire from enemy planes meant that people got fucked up a lot, and there are many moments in Fortress where somebody will slump over in a spray of blood, mid-sentence, and those moments will make your heart sink.

In my opinion, this is the best movie on the list (by far), and should be rated at least in the low 7s. Yes, I know this roundup was supposed to concentrate on the worst war movies, but sometimes you come across a gem and you just gotta gush over how good it is. I’d even recommend that you save this one for when your brain isn’t recovering from a hangover. Watch it with your dad or something.