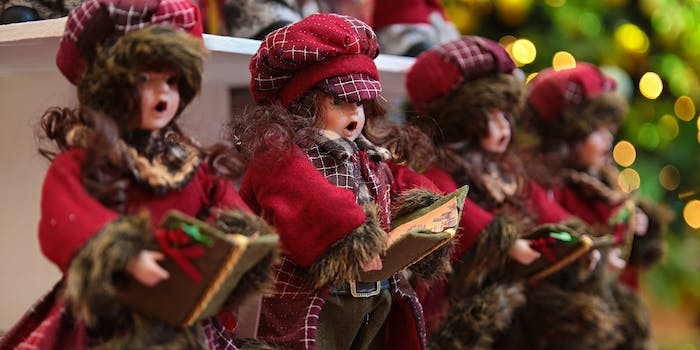 These are the 10 worst Christmas songs

Where 'Grandma Got Run Over By a Reindeer' is the height of hilarity.

Christmas songs are the best. You can’t get sick of them since you mostly hear them only one month out of the year, and no matter the climate at which you reside or the religious books you pray with, the timeless crooning of Bing Crosby, the yearly soul-stretching of Bruce Springsteen, the inspirational range of Judy Garland, or the underrated song stylings of Dan Fogelberg will warm your soul.

So, let us say again that Christmas songs are the best. Unless they’re the worst. And to be honest, there’s plenty of bullshit out there that wants to be great but simply gets stuck in the chimney like a piece of fruitcake in your throat.

But let’s explore the crap that Christmas has produced, anyway. Because it’s always fun to hear the worst of our culture, so we know what to avoid for all future Christmas holidays.

Here are the 10 worst Christmas songs known to man. Make sure you listen to each and every one, because in order to appreciate all that you have during the holidays, you have to know how bad life can be.

1) ‘Grandma Got Run Over By a Reindeer’

When I was a kid, I thought this song was hilarious. But I know better now. This was written by Randy Brooks—who has neither the songwriting chops of Randy Newman nor the performance capabilities of Garth Brooks—and released in 1979. That means this song has been torturing us for nearly 40 years. But here’s one theory that actually would make this song slightly more tolerable.

This is actually a fine song. John Denver gets a bad rap, and this tells a solid, albeit harrowing, story. But maybe listen to this in February or May or something. Because, when you’ve got passed-out fathers and crying mothers and (maybe) the hint of a domestic violence situation, it doesn’t make for a joyful holiday song.

The New Kids on the Block have been trolling us with this song for 27 years. Seriously, if I want a funky Christmas, I’ll go with Marky Mark. Not his older brother.

I adore Paul McCartney in the Beatles, but I don’t care for Paul McCartney in Wings. And this song is probably the biggest example why. It’s like McCartney set out to make this cute little song with the cute little chorus. And then some bratty 5-year-old hijacked the cheap-ass Casio mini keyboard and started pressing random buttons.

Honestly, I’ve always liked this Wham song. But the story is a bummer (and honestly, the song’s synthesizers, not to mention the band’s haircuts, don’t hold up so well). This dude gets dumped the day after Christmas, and he just can’t let it go. Hey George Michael and, um, the other dude who used to play in Wham: I hope you eventually found that somebody special. And I hope you ditched those silly haircuts.

Never listen to Tiny Tim, not even to be ironic. This is yet another example. Need more proof? Here’s a Billboard review from 1996.

For nostalgia’s sake, it’s fine to listen to Alvin and the Chipmunks plow this once a year. But for all that’s holy, do not introduce this tune to your kids before they’re, say, the age of 12. Otherwise, you’ll have to hear those chipmunk voices over and over and over again on some road trip to hell, and it will make you want to steer the car off the bridge and into that icy, inviting river. One NFL editor did not heed that advice. She barely survived the ordeal.

5-yr old decided Alvin and the Chipmunks "We Wish You a Merry Christmas" is his song of choice for car ride. Only 4 hrs left. #parentingfail

Apparently, the Duck Dynasty family did a Christmas album.

Sure, if I want to enjoy my Christmas meal of roasted goose and hot buttered rum with salty tears streaming down my cheeks and snot gathering above my lip, this NewSong tune is the perfect vehicle.

Before I started compiling this list, I’d never heard this song. But now that I have, I think maybe it’s time to think about canceling Christmas altogether.