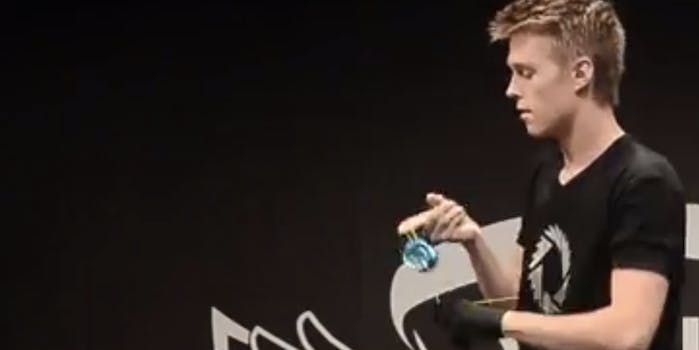 A quick primer on string theory.

Perhaps you recall a time in elementary school when your classmates were crazy about yo-yos. A few managed simple tricks—walking the dog, rocking the baby—but soon enough moved on to other fads and fixations. (For my cohort, it was Tamagotchis.)

Gentry Stein of Chico, Calif., meanwhile, continued to fine-tune his technique, and took top honors at this year’s World Yo-Yo Contest in Prague. Below, watch him wow the crowd with gravity-defying moves that would tie your average hobbyist in knots.

If your head isn’t spinning yet, you can also check out a Stein performance at the 2013 U.S. Championship, which he won as well.

Is there some other childhood pastime I could hope to master like this? Unless we turn “forcing specific Ouija results” into a competitive sport, I rather doubt it.