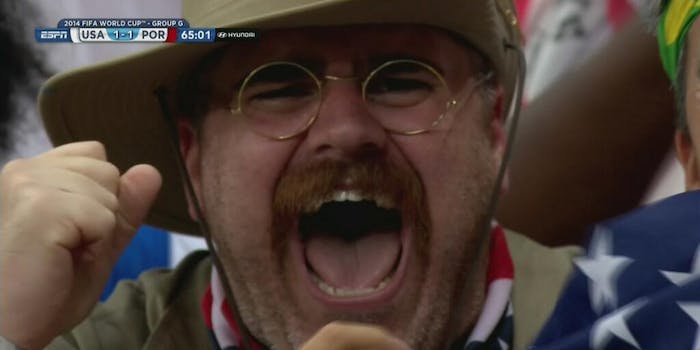 Now we can suffer disappointment like the rest of the world.

Something beautiful happened online last night: America started to care about a soccer. Putting aside their obsession with ‘handegg’ and Donald Sterling-ball, the U.S. community on Twitter all rooted for Team USA as they valiantly fought against Portugal.

While the end result was a draw, the U.S. fans clearly won out. With costumes including a fan dressing up as former President Teddy Roosevelt.

Others to simply went mad with joy at a goal.

While the fans at the stadium went literally wild, Twitter was also abuzz with America’s new-found interest in the beautiful game and tried to understand it.

This is gonna be good …… #FIFA

When the going got tough, and Portugal equalised in the very last few seconds of injury time, however, the mood turned ugly.

#USAvsPOR ends 2-2 and an entire nation is left confused as to how a sport can end in a tie.

Some were just confused.

Damn you Ronaldo and your perfect face, hair and body

But at least Buzzfeed was on side to console the upset American fans.