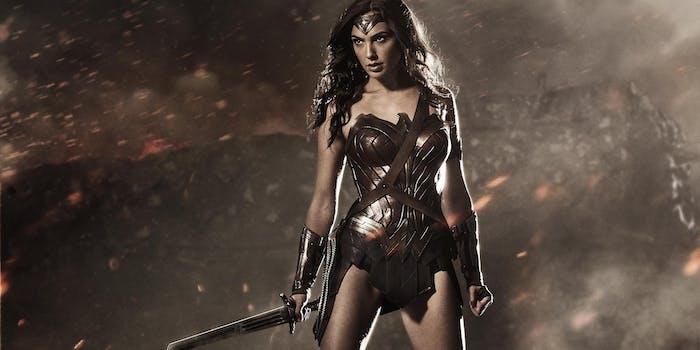 Here’s a first look at Gal Gadot as Wonder Woman

Warner Bros. just debuted the first teaser trailer from Batman v Superman: Dawn of Justice, along with the first image of Gal Gadot as Wonder Woman.

Director Zack Snyder greeted a packed hall of Comic-Con attendees, who had been queuing all night for a glimpse of future blockbuster hits such as this.

Batman v Superman was the first heavy-hitter of the day, and the comics fan community is already buzzing over Wonder Woman’s first appearance. Her costume includes a Xena-like metallic bodice and knee-high boots, and what can charitably be described as an extremely short miniskirt. In keeping with Snyder’s gritty reboot of the DC universe, she looks very different from the bright red, blue, and gold of the classic Wonder Woman comics and TV series.

The Batman v Superman teaser was enough to get fans excited, but it’s obviously very short and tells us next to nothing about the film’s plot. The clip reportedly showed Batman standing in the rain, wearing a visor. He turns on the Bat-Signal, at which point lightning strikes and Superman appears overhead, his eyes glowing red. So basically what we know now is that Batman and Superman both appear in Batman v Superman, and that weather exists.

Since this film doesn’t come out until 2016, DC Entertainment’s biggest Comic-Con event will actually be later on Saturday evening: the premiere of Gotham’s pilot episode, along with a panel between each of DC’s upcoming TV shows.