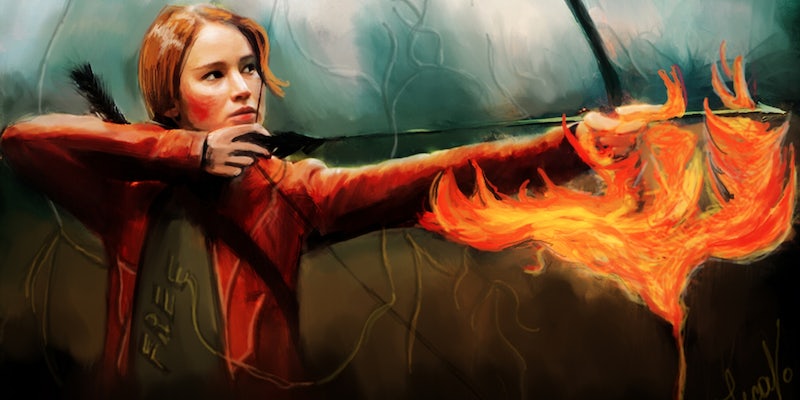 It’s time we developed a name for that thing Hollywood keeps doing. You know the one.

It’s time we developed a name for that thing Hollywood keeps doing. From here on out, I’m calling it the Exclusion Myth.

The Exclusion Myth is a longstanding notion in Hollywood that boys won’t go see movies about girls. In fact, many Hollywood screenwriters are actively taught not to pass the Bechdel Test, an unofficial baseline measurement for whether movies contain multiple female characters with agency whose parts don’t revolve around the actual, male stars of the movie.

But despite all of these recent proofs to the contrary, the Exclusion Myth persists—and it has jawdropping nonmythical real-life repercussions for actual women within the industry.

In honor of the success of the record-breaking holiday release of Catching Fire, the Hunger Games sequel that just scored a blazing $300 million over two weekends, the New York Film Academy has released a comprehensive and staggering infographic about gender inequality in Hollywood. Cleanly dispensing dozens of facts, the graph proves just how pervasive systemic inequality is for women in Hollywood, both fictional and real.

The graph examines the top 500 grossing films produced over the last five years in Hollywood. The results reveal stark correlations between the objectification of women on screen and their lack of power, both as characters and behind the camera. Only 10 percent of movies featured an equal number of women on-screen, and only a miniscule 20 percent of jobs within the industry have gone to women in filmmaking. Only 31 percent of all speaking characters in film are women—and a third of female characters who speak have to take their clothes off at some point.

With this kind of limitation in screenwriting, it’s hardly a surprise that when women are given the chance to write and direct, representation of female characters goes up. A pity, then, that women sell their original scripts far less often than men.

The graphic points to Kathryn Bigelow’s historic Oscar win for Best Director in 2010, in which she became the first woman in history to win the award for The Hurt Locker after only three other women had been nominated. But it also notes that this year no women were nominated in any major creative category: Directing, Cinematography, Film Editing, Writing (for Original Screenplay), or Music. Then there’s the fact that despite the Academy’s recent election of its first African-American female president, 77 percent of all Oscar voters are male. No wonder the average age of female Best Actress winners skews eight years younger than their male counterparts.

Both Catching Fire and Frozen received highly favorable reviews from critics and audiences, and already discussion has turned to the hope that such films can change the way Hollywood thinks about gender. But both of these films relied heavily on the action component of their storylines to launch a “broad” appeal to audiences. Frozen in particular was widely criticized for a marketing campaign that did everything it could to depict the movie as a screwball comedy with male animal characters, appropriate for young boys. Its opening trailer didn’t even show either of its two female leads. If Frozen’s success teaches Hollywood anything, it’s likely to be that such disingenuous marketing campaigns actually work, not that they’re harmful.

Sadly, Frozen isn’t alone. The golden demographic in Hollywood is that of the young male moviegoer, ages 18 to 23. This is by far the most highly valued demographic even though women and girls of all ages purchase 50 percent of all movie tickets in the United States. But it’s easy to see that the films that receive the biggest marketing, and then go on to do best at the box office, are the films that have the hallmarks of rowdy boy appeal: action, male heroes, and of course, lots of explosions. Modern audiences also tend to value these kinds of films more highly than films with traditionally less “masculine” themes. Not to mention that the majority of the most critically acclaimed films of all time depict women as either sexual and creative muses for the men around them, or tragic figures with little if any agency over their own lives.

Many critiques of the film industry have ripped apart the damaging feedback loop at work in the Exclusion Myth’s assumption that women won’t sell films. When film producers believe writing roles for women will damage the film’s success, then films with women tend to spend a lot of time attempting to excuse itself for having a female character as the lead. This is why the sci-fi Aeon Flux skewered its own adapted plot with an invented love story, and why romantic comedies like This Means War and The Bounty Hunter styled themselves more as action films then romances. When films that suffer from these kinds of apologetic filmmaking attempts subsequently fail, as Aeon Flux famously did despite having a female director, then the takeaway for producers generally tends to be that the films failed because they starred women—not that the films failed because they were flawed in other ways.

The truth is that plenty of female-helmed films have been box office hits in the past few years—think Alice in Wonderland, Bridesmaids, and Brave—but those successes have been largely attributed to other things. Alice in Wonderland was a success because of Tim Burton and Johnny Depp, not newcomer Mia Wasikowska; Bridesmaids had the influence of Judd Apatow to thank for helping it find its audience. Brave was a Pixar film, widely considered “disappointing” because in the wake of the studio firing its female director halfway through production, it received a slightly lower critical valuation than Pixar’s long line of boy-centered classics. And the same kinds of criticisms swirled around Bigelow’s Oscar win, with many people speculating she only won as a kind of passive-aggressive Hollywood backlash against her famous ex-husband, James Cameron, who was also nominated the same year.

And it’s not just women who suffer from the Exclusion Myth. Hollywood also thinks white audiences won’t see films about black characters, at least not unless Will Smith is in them. Last year’s Sundance winner, Ava Duvernay, made history by becoming the first African-American woman to win the award; yet her film was upstaged by the far more optimistic Beasts of the Southern Wild, which achieved an Oscar nod in her stead.

As Salon opined, “Will whites see a black indie film like Middle of Nowhere?” it appeared that Hollywood was stuck playing out the same Exclusion Myth—this time pitting black directors and actors against indifferent white audiences. Nevermind that Halle Berry’s thriller The Call scored a cool $70 million on a small budget earlier this year, or that TV audiences have flocked to the unapologetic diversity of Sleepy Hollow, making it one of this fall’s highest-rated hits and the first new show to secure a renewal.

Then there was the notoriously disingenuous movie poster for Tom Ford’s acclaimed film debut A Single Man. No one looking at the poster, which shows Colin Firth and actress Julianne Moore pillowed next to each other, would have thought they were in for a heartbreaking gay love story. But—you guessed it—straight audiences won’t go see films about queer characters. Brokeback Mountain was just an exception, surely, as is this current breakaway hit featuring a queer character and his POC boyfriend.

But perhaps the real lie of the Exclusion Myth, in the age when anyone can film a movie on a smartphone and upload it to the Web, is that the Exclusion actually keeps marginalized women and other minorities from creating their own narratives. As actress Michelle Rodriguez said this summer at Comic-Con’s “Women who Rock” panel—one in which a stellar panel of successful actresses were booed and heckled by the mostly male audience for “talking too much”—if women can’t find ways into the established structure of Hollywood, it won’t be long before they start doing things on their own:

“We gotta start writing,” she said again. She meant women. “Writing, and directing, and producing the kind of content we want to see. Because otherwise, nothing’s gonna change.”

The reluctance of women to play in a system that routinely marginalizes them may be why fully half of the independent directors at this year’s Sundance festival were women. More and more, filmmakers and creators tired of being marginalized are working outside of the Hollywood system to fund their art. But the NY Film Academy notes that despite the abundance of female directors at the festival, most of them struggled to get wider release.

Ultimately, the Hollywood Exclusion myth hasn’t kept these creators and their diverse characters from finding audiences that desperately want to support and hear their stories.

All it’s doing is keeping their wider, equally desperate audience from being able to find them.