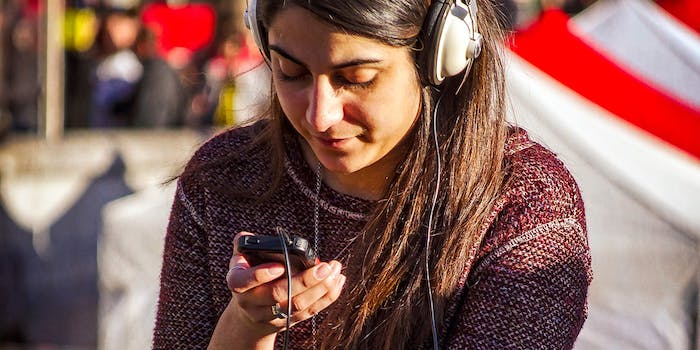 Your ears will thank you.

This past year saw an enormous growth in podcast scale and scope. Serial, a podcast with two female producers (Sarah Koenig and Julie Snyder) and a female host (Koenig), became the most downloaded podcast in history with nearly 70 million downloads.

Though podcasts have long been a male-dominated medium, more and more women are taking the mic. And the podcasts they’re churning out are hilarious and witty must-listens. Here are five podcasts you won’t regret downloading for your morning commute.

Comedy duo Corinne Fisher and Krystyna Hutchinson describe their podcast as “one candid story of intercourse at a time.” The show is high-energy, but Fisher and Hutchinson never shy away from tough questions about sex, relationships, how we feel about our bodies, and what we do with them.

And nothing is off the table. Over the past two years, the co-hosts have explored all manner of topics and sexual acts with guys they’ve slept with. In a recent episode, they even explored asexuality with a panel of asexual guests.

2) Another Round with Heben & Tracy

Heben Nigatu and Tracy Clayton are writers at BuzzFeed, and on Another Round, they discuss everything from race to politics to pop culture to their favorite alcoholic beverages. They share stories from their own lives in a segment called “What Had Happened Was,” such as Clayton’s memorable first visit to a Cracker Barrel. They also interview guests, investigate their colleagues’ feelings and reactions to current events, and tell “Tracy’s corny jokes.”

3) Not Too Deep with Grace Helbig

A wave of podcasts like Marc Maron’s WTF and Pete Holmes’ You Made It Weird  are built around earnestness. Grace Helbig promises to focus on “the laffs more than the feels” in this very enjoyable podcast featuring delightfully superficial interviews. The questions are incredibly silly and fun. For example: “If you could watch one celebrity fall down without getting hurt, who would it be?”

Fans of Helbig’s YouTube channel will not be disappointed, and if you haven’t seen Helbig’s work, the podcast is a perfect introduction to her lighthearted, irreverent lens.

Womp It Up! is a hilarious fictional podcast from Playing House’s Lennon Parham and Jessica St. Clair. They revisit their beloved Comedy Bang! Bang! characters Marissa Wompler (St. Clair) and her teacher/mentor/former sniper (Parham). The podcast is Wompler’s year-long senior project that will culminate in graduation from her Marina Del Rey high school.

Episodes include visits from guests played by other Comedy Bang! Bang! favorites such as Jason Mantzoukas and Seth Morris. The podcast, which is produced by Scott Aukerman, is full of absurd characters that will delight fans of Comedy Bang! Bang!’s zany brand of comedy.

5) The Real Housewives of Bohemia

The Real Housewives of Bohemia is the podcast your cool cousin who lives in Brooklyn made with her even cooler roommate. Episodes open with variations on audio art and what follows is engaging and experimental, but never too hip to be enjoyable.

Hosts Lauren Besser and Becca Klaver are friends, feminists, and lovers of all things artsy, girly, and witchy. The podcast is full of giggles and earnest conversations about things these women care about deeply. The most recent episode, “The Drinking Game,” features a fascinating retelling of what happens when a friend delivers you a message from across the country using Miranda July’s Somebody app.

Photo via Garry Knight/Flickr (CC BY 2.0)