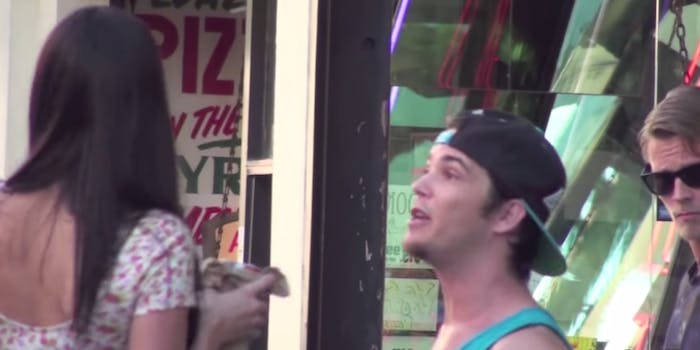 Woman pretends to be drunk in public, men act in staged viral video.

That viral video of a woman pretending to be drunk and meeting predatory, abhorrent men on Hollywood Boulevard was staged, reports LA Weekly.

The YouTube video was billed as a “social experiment” to see what happens when male bystanders are approached by a drunk, lost woman. Everyone featured in the video hit on her and tried to take her home. After reportedly being tagged for his appearance in the clip by his Facebook friends, one of the men, Mike Koshak, wrote a Facebook post claiming he was acting.

“Just to let people know, the video that has me in it that’s going around the web was all staged and all of the people in it were acting,” Koshen wrote. “Please try to refrain from posting or tagging me in this video, as it was staged does not portray myself or any of the other people in it correctly.”

In the comments of his post, Koshak seems defensive but generally at peace: “Lol cause it’s a false ass portrayal and I was lied to about what the video even was. Faulty ass shit.”

The claim, at this point, is a logical one for a guilty party to make, but LA Weekly obtained screenshots of private messages between the video’s producer and Koshak: “Yo dude, totally cool with you telling everyone that we came up to you and you acted the part for the video.”

At this point, it’s overwhelmingly likely that the video was, in fact, a staged situation that exists solely to bait clicks.