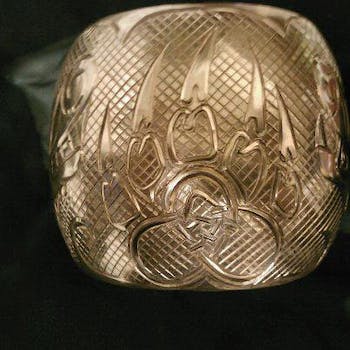 Artists auction their work on Facebook to support bereaved family

When two sisters passed away within weeks of one another, close friends and total strangers came together on Facebook to raise money for the family by auctioning a very special bracelet.

A double tragedy, a trio of sympathetic artists, and the generosity of strangers on Facebook: It all adds up to this moving tale of wolf and hummingbird bracelets and a fundraiser for a bereaved family—a fundraiser that just keeps getting better. And the Internet has one more day to help.

Sisters Teresa Turner and Sylvieanne Lewis of the orca clan of the Gitxsan Nation recently died within weeks of one another, leaving a family burdened not just with grief but also with heavy bills for funerals and transportation. (The family had to travel twice from rural Hazelton, over 900 miles from Vancouver, BC, where the women died.)

Marilyn McKee, a jewelry carver, close friend, and schoolmate of Turner’s at the Northcoast Jewelry Arts Program at Native Education College, wanted to help. McKee donated the bracelet she’d been working on, one rife with symbols of significance to Turner and her niece, Rebecker.

When the girl’s mother, Lewis, died shortly afterwards, McKee decided to honor her memory with another bracelet, this time auctioned to help the family. She thought it might bring in a couple of hundred dollars. That was $1025 ago and counting.

“As a new artist, the hours carving and all the business stuff had me going 16 hours,” McKee told the Daily Dot.

Teresa was in and out of the hospital and I kept trying to make it [to visit]. All she asked was one time to come to the hospital… ‘Next time I will for sure make it,’ I would say. As a single mom there were always the bills. Rent had fallen behind and so much had happened.

We talked constantly, but she never told me how bad it had gotten. I never made it to a single appointment with her. The day Teresa passed I had been trying to call all week, and I had left message after message… the last message I left was, ‘I am really worried about you and love you,’ so at least I have that. I always told her I loved her, as she had become like a sister.

McKee said that at the moment she was told of Turner’s death, she was working on a bracelet with a heart and a hummingbird, oblivious to their symbolic relationship with her friend. Her son said, “Mom, you have never put a heart in your work,” and Turner always did.

“I knew this particular bracelet had to be gifted to the family,” McKee said.

“The day before Sylvieanne passed, we had Facebooked, and we planned to go for coffee sometime,” McKee added. “I told Sylvieanne traditionally we give a piece to thank those who have helped us; her words had helped so much in my own time of sorrow, and yet she had lost her sister and consoled me in my sorrow. We never had coffee and only met during the funeral.”

When Lewis passed soon after, of a chronic illness her daughter attributes to a broken heart, McKee resolved to make another bracelet to honor her memory. She started an auction, with the intention of donating the money to Turner and Lewis’s family.

“When the first bid came in from Pansy, another Haida artist, I was thrilled,” she recalled. “I could give the family $100! But when someone said there was a bid of $500 I thought it was a joke.”

That someone was jeweler Pep Kay, who noticed the auction on Facebook.

“I felt very strongly that a person (Marilyn) who took their very best possession (the bracelet) that was the prized work of her own hands and gave it freely to help should be honoured,” Kay told the Daily Dot. “I think what Marilyn was and is doing is an amazing example of people at their best. Artists are always the most supportive of communities. We should all do what we can.”

What Kay did was place the winning bid of $500, and then donate the bracelet back for another auction, which closes June 30. Artist Alex Robertson has added a silver pendant as well. The current bid for the two pieces is $525.

“The bracelet was my newest piece, and before I offered it up was catching the most interest, so I figured it would sell fastest,” explained McKee.

“I remember talking about running outta food for my son, and the next day Teresa walked in with a box of groceries. She did not have the extra to give but she did with all her heart.”

The question is, will the Internet do the same, one more time?