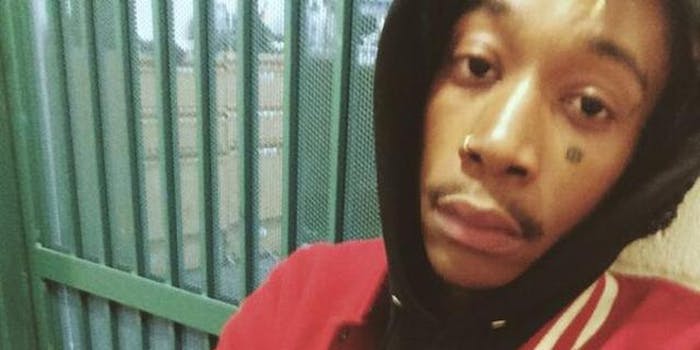 Bars can't stop him from promoting his new mixtape.

Khalifa is about to release his new mixtape, 28 Grams, and was en route to the Neon Desert Music Festival in El Paso, Tex., when he was arrested for possession. El Paso is just north of Sierra Blanca, the town where Fiona Apple, Willie Nelson, and Snoop Dogg have all been arrested for drug possession. There’s no word on just how much weed he was carrying, or if he has a weed carrier. Khalifa was arrested in 2010 for possession; he’d boasted in earlier interviews that he dropped $10,000 a month on weed.

This could be an extremely meta marketing stunt for the album release, but he does have a TMZ-approved mugshot. We’re also not sure why Khalifa was allowed to keep his phone and take a “jail selfie,” but it makes for excellent promotional material.

The rapper also took this photo of his cell door, to show the barriers the Man has put in front of him.

The #FreeTrapWiz hashtag has been circulating today, and his fans are showing solidarity.

Khalifa seems to be holding up. He’s continued to promote his new mixtape from behind bars, as one does.

They’re tryna figure out how many grams I had. How ironic.

I wanna drop 28 Grams but they got me locced up. Soon as I get out, the tapes comin out. Fucc that.