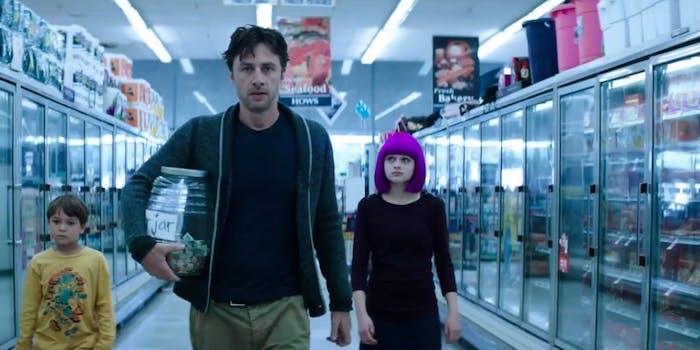 If you like Zach Braff, you’ll love the trailer for Zach Braff’s new movie, starring Zach Braff as that character Zach Braff always plays, written and directed by Zach Braff.

Funded via Kickstarter, Wish I Was Here is Braff’s follow-up to the 2004 Manic Pixie Dream Girl hit Garden State. It follows the story of a 35-year-old struggling actor as he tries to find meaning in his life, and is essentially the Zach Braffiest movie imaginable.

Much as we like to avoid using the word “quirky,” it’s really the only way to describe the trailer for Wish I Was Here. Surrounded by an ensemble cast of white people plus Turk from Scrubs, Zach Braff goes wig shopping with his children, visits various picturesque natural locations, and sinks into a dream world where he’s an astronaut—all soundtracked by whimsical indie music, of course.

Garden State was one of those “love it or hate it” kind of movies, so Braff was on the receiving end of a fair amount of pushback when he announced his Kickstarter campaign. However, people paid up $3 million for this movie, and the resulting trailer is precisely what every Zach Braff fan would’ve hoped for. Mock all you like, but Wish I Was Here was successful before it was even filmed.