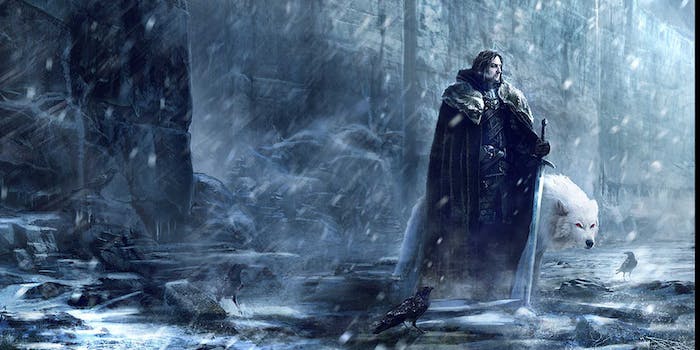 Winter is coming in “Game of Thrones”—but why?

Scientists debate the weather of Westeros.

Forget the science of Star Trek. The weather of Game of Thrones needs your attention.

In a universe that includes dragons and blood magic, scientific accuracy is not a major focus. Still, fans have been puzzling for years over the meteorological mysteries of Westeros. What kind of planet allows for such erratic seasons, including winters that show up seemingly at random and can last for an entire generation? 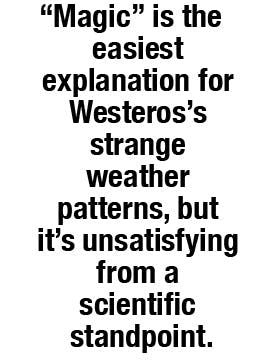 A group of physics and astronomy grad students from Johns Hopkins University are trying to find out.

Written for the “Oldtown Journal of Evil Omens” (which we wish was a real thing) and posted to Cornell’s open archive arxiv.org, the students’ paper is succinctly titled “Winter Is Coming”. Not only do they investigate possible reasons for the random nature of Westeros winters, they also try to find a way to predict them.

As they point out in the abstract, a popular explanation is that the world of Game of Thrones orbits a double star system:

“Many a maester have tried to play the Game of Weather Patterns and foretell when to plant those last turnip seeds. Tried and failed. For other than the somewhat vague (if not outright meaningless) omens of ‘Winter is Coming,’ their meteorological efforts have been worse than useless. To right that appalling wrong, here we attempt to explain the apparently erratic seasonal changes in the world of G.R.R.M. A natural explanation for such phenomena is the unique behavior of a circumbinary planet.”

Various theories are brought up and dismissed. A tilt in the axis of the planet is impossible, “as even Ser Gregor could tell you, a planetary moon precludes axial excursions by stabilizing the tilt.” Similarly, pollution seems like an unlikely cause, unless dragons emit an unknown-to-Earth-science type of greenhouse gas. “Magic” is the easiest explanation for Westeros’s strange weather patterns, but it’s unsatisfying from a scientific standpoint. 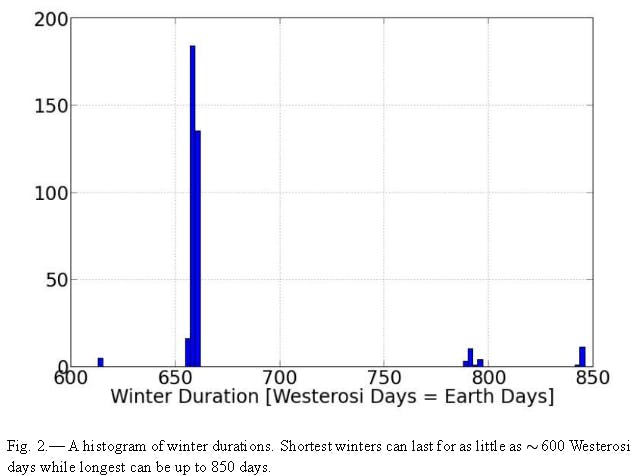 Photo via Winter Is Coming

To get a decent idea of the regularity of the seasons, the authors had to create a computer model of a circumbinary planet and its orbit. But as astronomer Stephen Kane wrote in Science magazine, “The pattern of winters and summers plotted in the paper ‘doesn’t quite seem chaotic enough’ to cause the turmoil observed in Westeros”.

The paper’s final conclusions? “With heavy hearts, we conclude that our attempts to provide the good folks of Westeros with a reliable weather forecast are inconclusive.”