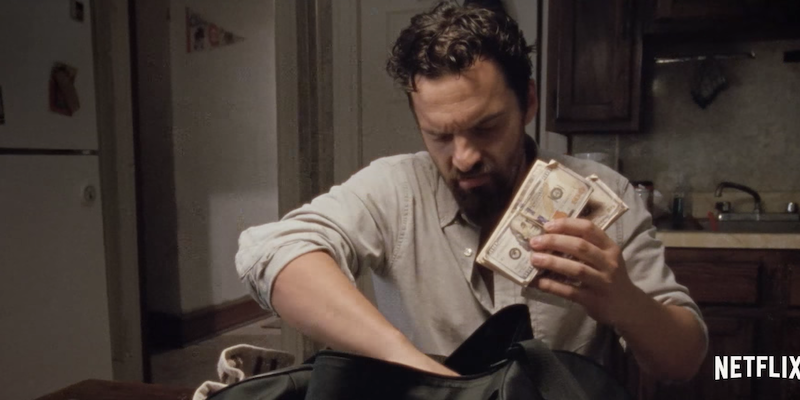 Review: Netflix’s ‘Win It All’ just about breaks even

Eddie Garrett (New Girl’s Jake Johnson) is not the sort of dude who has a history of winning.

A gambling addict who parks cars for a living, he’s been drifting through life one debt at a time, wasting every moment when he might be even slightly ahead. His older brother (Joe Lo Truglio) is forever trying to get Eddie to grow up and come work for the family lawn care business, but Eddie’s convinced he just needs to hold out until his big win comes along.

When a disreputable acquaintance offers Eddie 10 grand to babysit a mysterious duffel bag while he’s doing time, Eddie sees a light at the end of the tunnel. Unfortunately, it turns out that leaving a mysterious duffel bag with a gambling addict is not the greatest of plans. Practically before his convict friend is out the door, Eddie has cracked open the bag, discovered a pile of cash inside, and begun to concoct a series of very, very bad ideas.

We won’t spoil all the ways things go wrong, but you can probably work out a few for yourself. Soon enough, Eddie is deep in the hole to a guy to whom you should not, under any circumstances, owe money. Realizing this is literally life and death, Eddie begins trying to earn back the missing money, put his shabby life back together, and even romance the way-too-good-for-him Eva (Aislinn Derbez), who for some reason finds the particular shade of all his red flags to be attractive.

Eddie’s descent to rock bottom happens in a swift and predictable manner, so much of Win It All’s runtime is devoted to watching him try to clean up his mess and finally build a functional adult life. Unfortunately, the particulars of that path never veer outside the realm of predictability. The script, co-written by Johnson and director Joe Swanberg (Drinking Buddies), is by turns sweet, funny, and cringe-inducing (in a good way), but most viewers would be able to sketch every beat out based on nothing but the setup “a gambling addict agrees to watch a bag of money while his criminal friend goes to jail.” Eddie’s arc is enjoyable, and well played by Johnson, but never offers up any surprises. Whether that’s a reason to cash in your chips will depend on your tolerance for low-budget, character-based dramedy.

Thankfully, there’s a solid cast helping to elevate the material higher than it might otherwise reach. Johnson is great fun to watch as he squirms his way from one worst-case scenario to the next. Lo Truglio, often cast as broad characters somewhere along the “geek/perv/jerk” spectrum, is refreshingly grounded and sympathetic as Eddie’s brother, Ron. He loves Eddie, but he’s also clearly been fighting these same fights for years, so he refuses to be a pushover or a magic reset button to solve Eddie’s problems. In a weaker film, he could easily be played as overly vindictive, but here he’s more convincing: He wants his brother to do well, but he won’t keep enabling his tendency to make a mess of things.

Key & Peele’s Keegan-Michael Key also steals several scenes as Gene, Eddie’s theoretical 12-step sponsor who’s even more tired of Eddie’s bullshit than Ron is. His exasperation as he tries to wash his hands of Eddie’s latest catastrophe makes for some of the movie’s funniest scenes.

As mentioned above, there’s also a romantic storyline involving Eddie’s wooing of Eva, a single mom who’s cautious but infatuated. Derbez makes the best of an underwritten role, but her chemistry with Johnson never really crackles, and she frankly doesn’t have a ton to work with. Better chemistry or a better script would have helped, but she earns points for breathing more life into Eva than seems to be there on the page.

Win It All isn’t a total loss, but neither does it take down the house. A predictable script undercuts some solid character work from the cast, which is a shame because the trailer made it look like this might be an unbeatable hand. Watch it for Johnson’s winning performance, and let his poker face distract you from the flaws.