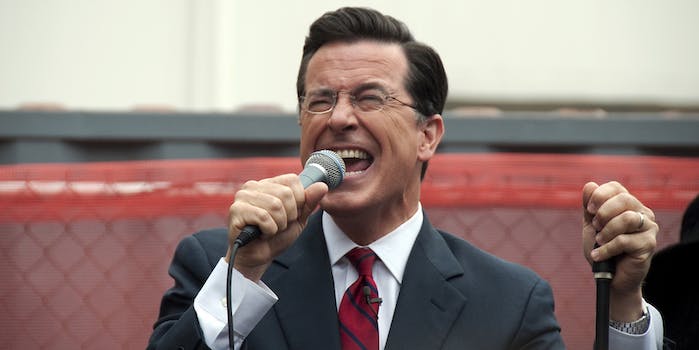 Are we ready for the ‘real’ Stephen Colbert?

Colbert is filling Letterman's shoes, but which Colbert, exactly?

But will he be Stephen or “Stephen?”

The Internet is having a collective braingasm over the news that Stephen Colbert is going to be replacing the legendary David Letterman as the new host of The Late Show. In an era of passing late-night torches, Colbert, the beloved host of the Colbert Report, will be stepping into compete with equally charming recent Tonight Show ascendant Jimmy Fallon.

There’s just one question: Will Colbert be taking his Colbert Report persona, in which he plays a cluelessly lovable Republican espousing satirically backwards views, with him? On the one hand, the network that brought us The Good Wife is clearly eager to break out of its stodgy mold, and Colbert’s carefully cultivated persona—even his name, “Col-behr,” is a pretentious twist on Col-bert—seems primed to do that. On the other hand, if “Stephen” makes a cluelessly racist remark cleverly designed to mock racism, will conservative CBS viewers appreciate the satire? After all, not even the Internet is in on the joke all the time. We can’t imagine that the kind of humor that resonated with the audiences of The Colbert Report and comedy partner Jon Stewart’s Daily Show will sit well with older Late Show fans.

The news left the Internet scrambling with questions:

@BlackGirlNerds Sooooo what happens to the Colbert Report? @BreakingNews

Being a journalist is hard work. RT @NYDailyNews How will Stephen Colbert pronounce his name on CBS?

CBS acknowledged Colbert’s satirical skills as part of the draw in the network’s press release Thursday, though they didn’t address the Stephen/”Stephen” conundrum.

“Stephen is a multi-talented and respected host, writer, producer, satirist and comedian who blazes a trail of thought-provoking conversation, humor and innovation with everything he touches,” said Nina Tassler, Chairman of CBS Entertainment.

Though the network narrowly avoided hiring a white guy named Jimmy, the choice means that the thrones of late night comedy remain entirely populated by, wait for it, white dudes. To all those people who predicted Ellen would be the only one worthy of taking over for Letterman: You forgot about the Report, the Peabody-award-winning GOP elephant in the room.

And what of Colbert’s career? Will his satirical creative bent still flourish if it’s not tied to the “Stephen” persona?

I love Colbert, but I’m unable to avoid the feeling that this is an innovative guy going to a very not-innovative job, and it bums me out.

Whatever the case, we’re excited, and we’ll be tuning in next year when Letterman’s reign officially ends. Hopefully, that will be more than enough time to work out the kinks.