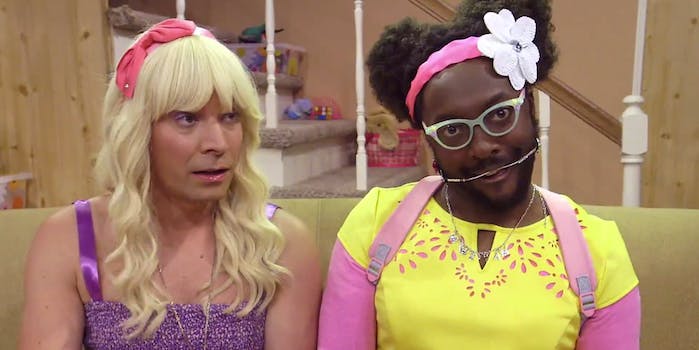 Jimmy Fallon’s teen persona gets a music video, and all we can say is ‘Ew!’

You might start saying "Ew" a lot more often.

One of Jimmy Fallon’s more polarizing recurring segments has gotten the music video it deserves.

It’s incredible that Fallon’s teenager character Sara’s catchphrase of “Ew!” hasn’t been made part of a video before now, but of course that was before she had her friend Will.i.am (or rather, Mir.i.am) join her down in the basement. The video is complete with way too much Auto-Tune, plenty of costume changes, and a list of just some of the things that are “Ew” for the teen girls. If you haven’t seen Sara go at it before, it’s quite a lot.

People will either love it or hate it, but it’s just catchy enough that it could possibly end up on the radio.

You can even buy the song on iTunes, which will benefit the SeriousFun Children’s Network and the i.am.angel Foundation. That’s certainly not something to go “ew” about.