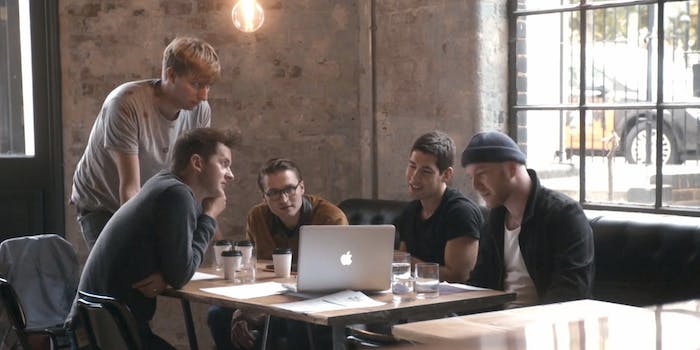 How Wild Beasts, Jameson, and a GIF artist collaborated on a GIF novel

Let’s just get straight in and explain the premise, OK? Jameson whiskey have set up a kind of artist’s bursary and then contacted sweet artists to see if they wanted money to make, wait for it, sweet art!

According to singer Hayden Thorpe, Wild Beasts were approached and given total free reign—no agenda, no limitations. Daunting stuff. After a thoughtful sit down with a cup of tea (we imagine) they concluded that “It’s more important that art gets made than not,” which is something we agree with wholeheartedly.

Ultimately, after seeing the video for Plurabelle’s song “Our Fires,” helmed by Parisian illustrator and animator Mattis Dovier, the band reached out. He’s around the same age as Wild Beasts and had similar touchstones—Dragon Ball Z, Master Systems, Nintendo—as well as a shared interest in Manga, which was, in part, a source of inspiration behind Wild Beasts’ most recent album, this year’s Present Tense.

Manga was actually an influence we missed when we interviewed them way back when, but Hayden explained that the connection was to do with Manga’s “subverted eroticism,” adding, “It’s the Japanese inversion of the West: a lot of the things they take on and twist are often far more interesting and darker than the Western palette will allow.”

The result is two stories, in the form a a GIF novel. The images were sketched out by Dovier while Wild Beasts provide the soundtrack in the form of two unreleased songs.

There’s “Blood Knowledge” about human’s innate instincts and “Soft Future” which, according to the band “was an experiment on our part to make a human song on laptops. We took those two songs apart, boiled them down and built them back up as soundtracks and each scene is accompanied by a piece of music.”

Screengrab via The Jameson Works/Vimeo