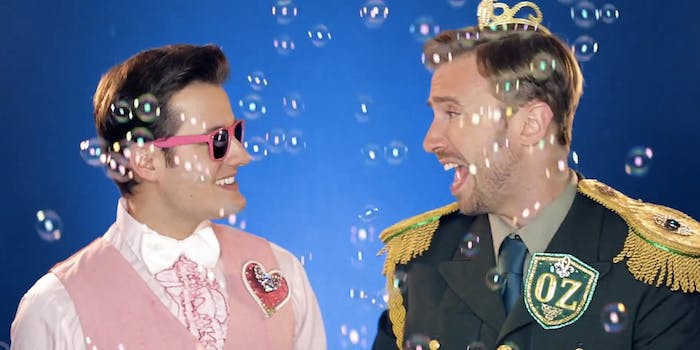 This a cappella ‘Wicked’ medley is witch-perfect

Because we knew Peter Hollens and Nick Pitera, we have been changed for good.

Theater geeks, hold on to your pointy hats. Renowned YouTube a cappella artist Peter Hollens partnered with equally talented solo musician Nick Pitera to bring a medley of Wicked tunes to life in his newest video.

Neither artist is a stranger to viral video success. Hollens has gained acclaim with his one-man a cappella covers that range from nerd-friendly fare like The Hobbit to pop songs by bands such as Fun and Imagine Dragons. Pitera rose to fame with his Brady Bunch-style grid video called “One Man Disney Movie,” in which he mashed up various Disney numbers while playing all the requisite roles.

Now the pair have joined forces for Wicked, primarily with Pitera playing the Glinda to Hollens’ Elphaba as they cycle through showstoppers like “What Is This Feeling,” “For Good,” and “Defying Gravity.”

Hollens told the Daily Dot that a collaboration with Pitera was a year in the making.

“Nick and I’ve been trying to figure out a song to do for over 12 months, and nothing felt right, until I came up with the idea of a Wicked medley,” Hollens said. “Nick is so perfect for Broadway material, and he has such a phenomenal counter-tenor range.”

Hollens produced all the audio and Pitera crafted the costumes, which change to accompany the song shifts, from preppy sweaters to a charming military jacket when they both take on the Fiyero role, to pink everywhere as they help us be “Popular.”

In the end, they even go green, although nothing so dramatic as the massive amount of green makeup the Broadway Elphaba tolerates. Still, Hollens and Pitera’s medley more than sufficiently quenches the theater geek thirst if you need your daily fix of Wicked.