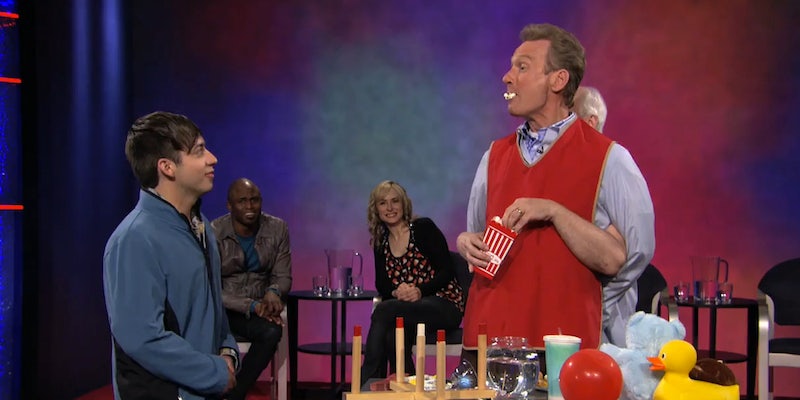 A newbie’s guide to every ‘Whose Line Is It Anyway?’ ever

Whose guide is it anyway?

The show might be made up and the points won’t ever matter, but every episode of Whose Line Is It Anyway? being put online is definitely real.

The CW, which has been airing new episodes of Whose Line for the past three seasons, quietly released every single episode of the improv show on its online streaming site, CW Seed, for fans in the U.S. (and people who know how to get around that sort of thing). It doesn’t include the U.K. version of the show hosted by Clive Anderson, but that’s still more than 200 episodes for people to pore over—completely for free—just as season 11 is starting up.

It seemed almost too good to be true. Every episode at our fingertips—and not just the ones the CW made? We briefly wondered if this was something that had happened months ago and we somehow missed out on getting our Hoedown fix, but the Whose Line Twitter feed confirmed it had only started this week and we could easily relive our childhoods online again.

All the Drew and Aisha, too! Watch 200+ episodes of Whose Line NOW on https://t.co/urTAKHXsK8. pic.twitter.com/M5DK3gqxMr

Although Aisha Tyler hosts the current run of the show, the episode library also includes Drew Carey’s run as host, and well, we’re overwhelmed at where to start. True, we didn’t really have to worry about continuity (unless you’re basing it off Colin Mochrie’s ever-recedinging hairline). Obviously we’re gonna binge-watch them all, but for those who barely remember the Whose Line of old or missed the sexual innuendos the first time around, we’re providing multiple guides to getting sucked back in—and see if Wayne Brady still actually won the whole thing, even though the points still don’t matter. (For the sake of consistency, we’re going with the episode numbers listed on CW Seed.)

Ribbing at each other was the name of the game. Everyone made fun of Carey for his weight, Ryan Stiles for his height and taste and shoes, and Mochrie for going bald—enough that they did an entire hoedown about it.

There’s always an extra level of fun when Carey gives his seat to someone else and comes out to play. It’s no different if he’s acting off Stiles (with Mochrie’s hands) or singing alongside Brady and Stiles in “Three-Headed Broadway Star.”

Stiles is, if nothing else, committed to his role—even when he’s given something completely ridiculous. Combine his esteemed Carol Channing impression, a silly action in a game of “Party Quirks,” and his tendency to include Carey whenever he can, and you’ve got magic. And possibly a concussion.

Out of everyone on the show, Stiles and Mochrie probably had the best chemistry together. That’s great for us because both Carey and Tyler keep pairing the duo together. The only thing better than watching them in-sync? Watching them wonderfully out-of-sync in a game of “Greatest Hits.”

The Mochrie “Meow” gag had been running the entire episode, but it comes to a head during the end for an “Irish Drinking Song.” When the ensemble plays together, you never know what to expect. As a coherent song, it never had a chance, but it’s a beautiful example of watching something crash and burn in slow-motion. And then it gets better. Wash, rinse, and repeat.

Bringing the audience into the mix always shakes up the otherwise solid dynamic of the cast. Sometimes they loved being serenaded by Brady or being part of the sketch, and others looked like they wanted to be just about anywhere else. Margaret and Bridey fell into the latter category, which singlehandedly led to the funniest edition of “Sound Effects” in the show’s run.

Stiles and Mochrie have pretty much mastered the art of acting with one’s body and other’s set of hands, but damn if Mochrie won’t manage to put everything on Stiles’s face in the process.

“Sideways Scene” didn’t last much beyond the CW’s first season, but when it was on, it tested their comedic capabilities along with the physical, as they’re laying on the ground the entire time. Once they’re settled, it turns into a scene change and takes things to another level.

Season 10, Episode 11: The Gronk pulls out his best dance moves

The current run of Whose Line has a special guest star on most episodes, which can be a hit or miss. Among the hits? Rob Gronkowski keeping up with Brady and Jonathan Mangum (aka Brady’s sidekick on Let’s Make a Deal) as they break out into song about his dancing abilities, showing that Gronkowski definitely doesn’t know his own strength.

Season 11, Episode 3: Keegan-Michael Key and Aisha Tyler try to save the day

We already know how great Keegan-Michael Key is from Key & Peele, but we’re glued to the TV every time he turns up as the fourth chair in the new Whose Line run. He’s not even in this round of “Greatest Hits,” but it’s he and Tyler who manage to steal the show as two techs trying to replace Brady’s “mic” that keeps going out.

Option 2) The very best from the players

Stiles always puts himself out there for the part, even if it means being born through Mochrie’s legs in a game of “Party Quirks.”

Brady is always excellent at coming up with songs on the spot, but this unlikely duo makes for his very best one.

Mochrie thrives when you throw him somewhere and have him do his thing, particularly when he was the reporter on the scene in “Green Screen”—only he couldn’t see what was behind him. His greatest task? Reporting on himself.

Consistently funny, Brad Sherwood is usually the host or the person looking for a date in group sketches, but this time he’s the one at the center as everyone comes to him for their problems.

Kathy Greenwood made frequent appearances in the fourth chair in a show with plenty of testosterone to go around, and her appearances always shook things up while maintaining the same Whose Line feel. Although people remember this particular “Party Quirks” for Mochrie’s absolute absurdity, it’s Greenwood who’s the unsung hero of the sketch. How she doesn’t break we’ll never know.

Come for frequent player Greg Proops in a giant fish mask, stay for the offhand comment that ended up being funnier than his punchline.

The Richard Simmons episode of Whose Line is a classic for how far he and the cast push the lines of both the censors and everyone’s comfort levels. And then he goes even further.

Although CW Seed claims “every episode ever,” we couldn’t find the Robin Williams episode in which he sat alongside Brady, Mochrie, and Stiles on the site. We loved his episode, but we only wish he were able to do more of them.

Stephen Colbert, long before his Colbert Report days, rapping. Do you need any other reason to watch?