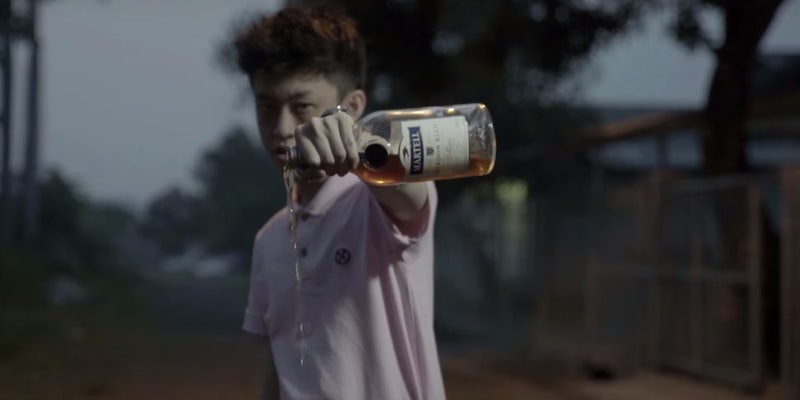 The Indonesian rapper who loves the N-word and wears a fanny pack.

He’s sporting a fanny pack and a pink polo. He says he’s only 16. He raps about pulling up to your door with a handgun. He goes by the name Rich Chigga, and Ghostface Killah wants to hop on his track.

Rich Chigga, born Brian Imanuel, dropped the music video for “Dat $tick” in late February. In the clip—which has amassed more than 7.4 million views—the viral rapper dabs with his friends in the most dad of outfits, and it’s kind of blown up the rap internet because the song is a certified banger.

This month YouTube channel 88rising posted a reaction video showing rappers like the Flatbush Zombies, 21 Savage, Cam’ron, and Ghostface Killah jamming out to the music video for the first time.

Despite the somewhat comedic and strange nature of the video, most of the rappers were feeling the young musician.

“This is the hardest n***a of all time,” says Tory Lanez of the Reebok-pouched teenager.

Meanwhile, Ghostface kept it cool with a head nod. “It’s dope. I want to be on this track,” he says.

Although at first many thought he was just another California kid, Rich Chigga maintains he was born in Jakarta, Indonesia. He says he was home-schooled and has never set foot in the U.S., learning all of his fluent English from rap videos and the internet. Rich Chigga started out doing comedy on Vine and Twitter and plans to continue doing so, even as he puts out more music.

How tf i jus found ja rule on pokemon go

When “Dat $tick” first dropped, he received a fair amount of controversy over his use of the N-word. None of the rappers in the reaction video were bothered by his usage, however.

“I get why people are offended, and I don’t want to sound pretentious but my goal is to help put an end to the negative effects of the N-word. I want more people to know that it’s a term of endearment in hip-hop rather than something racist when non-black artists use it,” Rich Chigga told Hypetrak, though he later said he plans to discontinue using it in his music.

When asked about how being Asian influences his rap, Rich Chigga said he tries to avoid talking about race.

“I avoid talking about my race at all times because I think that’s corny, but some people said I look like I got down syndrome which I do agree,” he told Pigeons and Planes.

Rich Chigga plans to continue his rap career, promising new music soon via Twitter. And why not, when Ghostface thinks you’re dope?