Can a hologram ever truly be 'perfect'?

The Voice is approaching its season finale, and one of its big selling points was a duet between Christina Aguilera and Whitney Houston’s hologram. But that digital resurrection was short-lived.

Footage from the performance was briefly leaked on Thursday night, though its authenticity hasn’t been confirmed by The Voice. According to TMZ, Aguilera was scheduled to sing a couple of Houston’s hits, and in clips posted online, you can see Houston flicker into view to sing “I Have Nothing.” 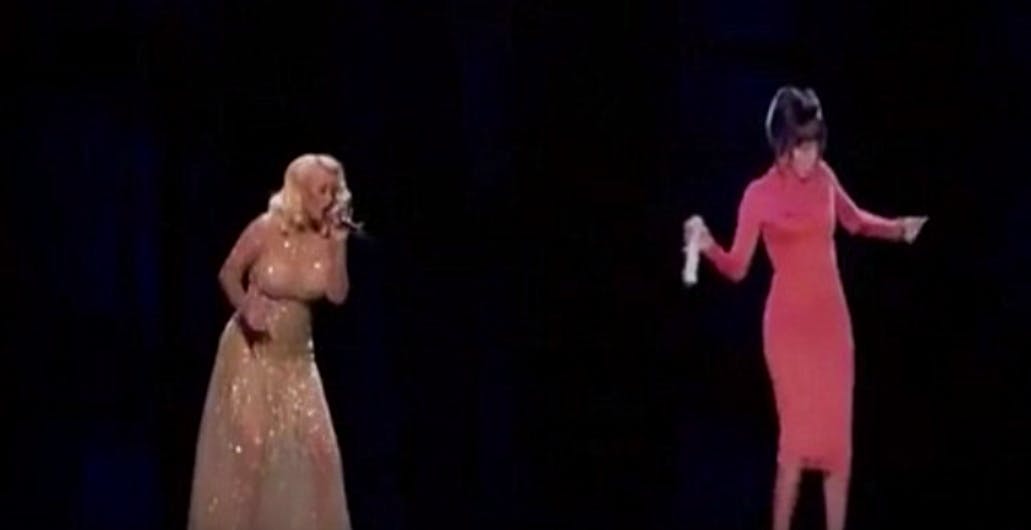 Hologram USA—the company responsible for holograms of Tupac, Chief Keef, and Julian Assange—had previously suggested plans for a world tour of Houston’s hologram, and CEO Alki David ensured “absolute authenticity.” Last year, David Nussbaum, Hologram USA’s senior vice president of sales, told the Daily Dot that working with the estates of artists is of utmost importance: “We’re not just going to put anything we want onto a stage or into a club without the estate saying ‘that’s the right material, that’s the way I want it said, that’s the way I want it delivered.’”

Pat Houston, the executor of her estate, said in a statement Thursday that they were “looking to deliver a groundbreaking duet performance for the fans of both artists.”

Holograms are new technology that take time to perfect, and we believe with artists of this iconic caliber, it must be perfect. Whitney’s legacy and her devoted fans deserve perfection. After closely viewing the performance, we decided the hologram was not ready to air. We have much respect and appreciation for Christina, and she was absolutely flawless.

In the aftermath of the cancellation, headlines punning on Houston’s song titles started circulating, and the Internet unloaded its displeasure, as it did with Tupac at Coachella. Considering how Houston was often treated in the media before her death, this seems like an unfair way to bring her back.

Indeed, this is still a new technology, one that must feel authentic if fans are going to be asked to enjoy it and, in some cases, pay money for it. But with all these holographic revivals, we also have to struggle with what exactly we’re enjoying. Can a hologram ever truly be “perfect”?

The Houston Estate and Hologram USA are united in our efforts to present a hologram of Whitney Houston that honors her legacy. Though the hologram technology behind the duet with Christina Aguilera worked flawlessly, The videos that were leaked of the Voice performance simply were still ‘a work in progress ‘ and not ready to be judged. The support from fans has been overwhelming, and the plans for the Whitney Houston hologram tour are on track.