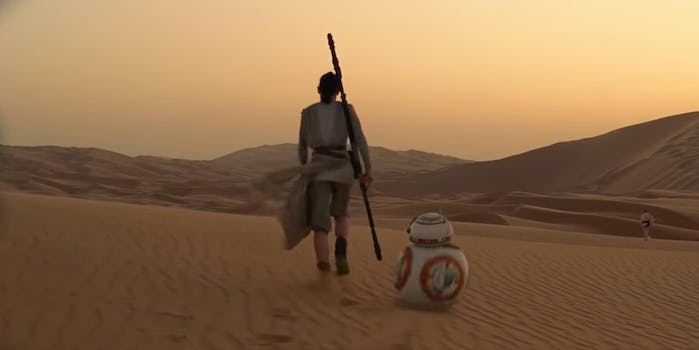 The ‘Force Awakens’ trailer, now with Luke Skywalker in every shot

Turns out Rey and BB-8 were walking across Tatooine, just following Luke.

If you’re like most Star Wars fans, the recently released final trailer for The Force Awakens left you with a question on your mind as massive as Jabba the Hutt: Where’s Luke Skywalker?

Now thanks to a fan-made trailer that fixes the problem, there’s a simple answer: He’s everywhere.

As it turns out, when Rey and BB-8 were walking across Tatooine, they were just following Luke. When that TIE fighter exploded? Luke fell out. Presented by Lukefilm Ltd., this revisionist history has Mark Hamill hilariously peeking out from behind Kylo Ren Pete Rose-style, photo-bombing Han Solo with his blaster drawn (and he hasn’t aged a bit!) and even somehow using his speederbike for intergalactic travel.

As the clip goes on, it hilariously makes even less sense. Wait a minute, are there two Lukes in that shot? Now is Luke’s head on Han Solo’s body? Nevertheless, the effects are impressive, especially in the shot where Luke slaps John Boyega’s Finn on the back.

Of course, the whole clip is a response to the building “Where’s Luke?” buzz of the last several days. Suspiciously missing from the trailers and the posters, director J.J. Abrams had to finally tell the Associated Press that Skywalker’s absence is “no accident… these are good questions to be asking.”

Although Hamill is most certainly in Episode VII, fans likely won’t find out how much—or why his appearance has been hidden—until the film opens on Dec. 18.