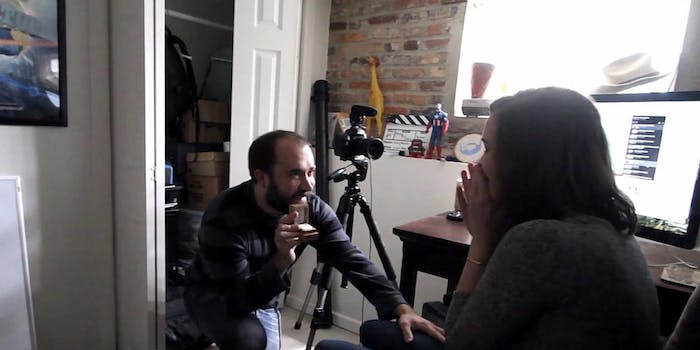 Who doesn’t love a feel-good YouTube story where the guy gets the girl and everyone lives happily ever after?

Who doesn’t love a feel-good YouTube story where the guy gets the girl and everyone lives happily ever after?

We know at least the first part came true when YT celebrity WheezyWaiter put up his 1,000th video on the mega network which contained a surprise ending in which the wheezy one—Craig Benzine—popped the question to Chyna Pate, with whom he’s been in a relationship since 2011. The pair met at a performance of Benzine’s band, Driftless Pony Club in 2010 and live in Chicago with their pet snake, Monty.

Benzine’s millennial video (that’s 1,000—I looked it up) is a rather rambling affair comprised of some live footage that builds up to an acrostic (I looked that up as well) that spells out “Chyna, will you marry me?” It was more original than your typical scoreboard proposal but maybe not as cool as arranging a flash mob acting out Beauty and the Beast as a prelude to the “will you marry me?” heart stopper.

Benzine’s username came from his former job as a waiter who was let go when his restaurant’s business went south. Pressed for money, he turned to vlogging, building a channel that now has more than 544,000 subscribers and videos that range from comedic schtick to commentaries about everyday life. The former waiter is also lead singer and guitarist with the aforementioned Driftless Pony Club, which has five albums under its belt. If that were not enough, he hosts a weekly YouTube show, The Good Stuff, which is a curated playlist of videos centered around a theme.

By the way, Chyna said yes. Now for the happily ever after.