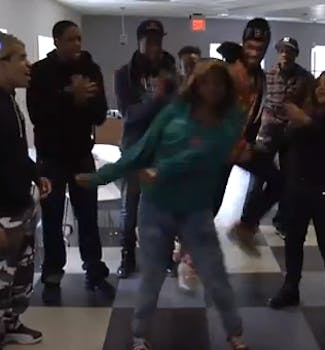 Want to learn the real Harlem Shake? Watch this

"This ain't Harlem," the folks at one of New York City's premier hip-hop radio stations will tell you. These are fighting words.

“This ain’t Harlem,” the folks at one of New York City’s premier hip-hop radio stations will tell you. These are fighting words.

In an effort to cut off any perpetuation to the notion that the Harlem Shake (the 30-second dance sequence made so unseemly popular thanks to YouTube and a brostep song by NYC producer Baauer) is anything close to the original “Harlem Shake” (the one from the 1980s that involves a breakneck beat, a shoulder lock, and an elbow pop), members of the Breakfast Club morning show at Power 105.1 FM have taken to YouTube to show the world how the Harlem Shake is really done.

“This is Harlem,” the video points out after the newly minted Original Harlem Shakers break into a four-minute dance circle that finds them taking turns running through their iterations of the classic Al B dance. Since being posted on YouTube yesterday, the video has already received more than 10,000 views.

“The Real Real Real Harlem Shakes” arrives as an obvious response to the wild craze that’s surrounded Baauer’s “Harlem Shake” and its army of variation videos, all of which have been seen more than 100 million times.

Those tribute videos, which Baauer and his management team have happily not filed copyright claims against, recently helped “Harlem Shake” ascend to No. 1 on the Billboard Hot 100 singles chart, making it the first song to utilize YouTube popularity to reach the top of the charts. (Billboard began factoring YouTube views into its Hot 100 metrics last week.)

In Harlem, the traditionally black Manhattan neighborhood responsible for such cultural institutions as stride piano, the Apollo Theater, and Juelz Santana, allegiants to the original Harlem Shake have begun getting the word out about Baauer’s unoriginal use of the name.

Last week, the people at Schlepp Films journeyed up to West 125th Street to speak with Harlemites about how they view Baauer’s “Harlem Shake.” Stretching five minutes and digressing from a state of “What the hell is this?” to “That’s downright offensive to the original Harlem Shake,” that video has already been seen more than 7 million times.

Here’s hoping the Original Harlem Shakers’ iteration of the iconic ’80s dance gets just as many views.