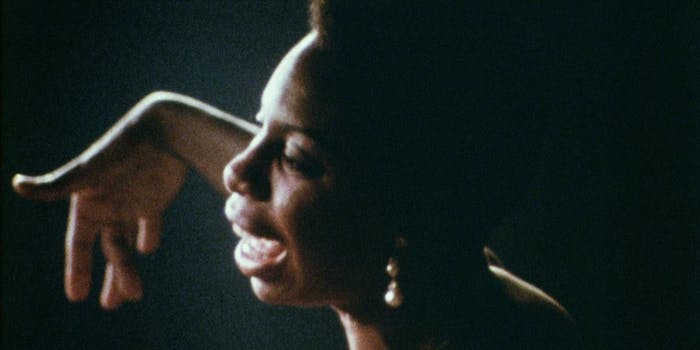 ‘What Happened, Miss Simone?’ explores the timelessness of Nina Simone

This new Netflix doc works best when it lets its subject speak.

When we first see her, Nina Simone walks on stage at the Montreux Jazz Festival in 1976 and takes a long bow, her dress mirroring the black polish of the piano beside her. She finally looks up at the audience like she’s waking up out of a dream, or maybe stepping into one. She’s expressionless, silent—until she gets behind the piano.

What Happened, Miss Simone?—which takes its name from a 1970 Maya Angelou–penned Redbook profile—was directed by Liz Garbus (There’s Something Wrong With Aunt Diane, Girlhood), who does a fair job of exploring this very complex subject. It’s also the first original documentary produced by Netflix, a promising indicator of where the streaming platform might head with the genre.

After that stellar intro, we’re ushered backward to 1968, and an interview with Simone in which she relates that there are times on stage when she “really felt free.” This is the crux of the film; Simone, born Eunice Waymon in North Carolina, 1933, was always aware of the line between freedom and oppression, and struggled with it every day. In an interview with Simone’s daughter, Lisa Simone Kelly, she relates, “My mother was Nina Simone 24/7, and that’s where it became a problem.”

We see Simone’s upbringing and classical piano training in the Jim Crow South, where she became fully aware of her skin color. The dramatizations of her early life feel a little out of place in this mostly archival-based film, but thankfully they even out as Simone edges into her early 20s and finds work as a performer in Atlantic City, where she adopts the name Nina Simone. We’re also introduced to Andrew Stroud, an NYPD cop who took on the role of manager and husband and wrapped “himself around me like a snake.” In 1964, Simone released “Mississippi Goddam,” and there the film shifts.

What Happened, Miss Simone? is being released at a time when many of the themes and messages remain sorrowfully and frustratingly relevant. The film pivots when it reaches 1968, the year Dr. Martin Luther King Jr. was shot and racial unrest braced several cities. In one archival photo of people mourning King’s death, a black man is seen holding a sign that says, “You better kill all blacks.”

Garbus illustrates Simone’s divide between being successful and speaking the truth: “How can you be an artist and not reflect the times?” she says in one interview.

She’s shown performing Civil Rights anthem “Mississippi Goddam” in Montgomery, Alabama, in 1965, and Garbus also illustrates her more radical shift as an activist. Journal entries illustrate a physically abusive relationship with Stroud, and her dissatisfaction with performing becoming a chore. In light of Simone’s struggle with bipolar disorder, which wasn’t diagnosed until later in life, some of the journal entries feel a little too intimate, like they lack context. That context is also missing from a live performance at 1969’s Harlem Festival: Simone, now fully radicalized, seethes the line, “Are you ready to kill, if necessary?,” but we aren’t told she’s reading a poem by David Nelson of the Last Poets.

Simone docs and biographies have been plentiful. Zoe Saldana stars as Simone in unauthorized movie Nina, out later this year, but there was backlash at the choice, and legal issues plagued the film. Here, Simone’s daughter reveals the abuse she endured at the hands of her mother and father, and perhaps because of the emotional breadth of this revelation, she became the film’s executive producer.

While the interviews offer some insight and the journal entries show the trouble in mind, the live performances collected here are the highlight. Simone demurely performing “I Loves You, Porgy” on Playboy’s Penthouse to an all-white crowd and the barely contained rage of “Mississippi Goddam” contrast with the on-edge Montreux performance. Throughout the decades, her voice never changes; it contains multitudes. It’s its own history book. And the film is at its best when it lets her speak.

Simone’s reappeared in songs from artists like Zebra Katz, Lauryn Hill, Common, and Xiu Xiu. John Legend name-checked her in his Oscar speech. In an interview clip from the ’80s, Simone is asked how far the Civil Rights movement has come, and she’s blunt: “There is no reason to sing those songs. Nothing is happening, there’s no civil rights movement. Everyone is gone.” What would Simone think of the activism around Ferguson, Baltimore, and Charleston? One of the last lines from “Mississippi Goddam” still echoes: “You don’t have to live next to me/Just give me my equality.”

In Angelou’s 1970 piece, she pointed to Simone’s power: “She is an extremist, extremely realized.” We don’t necessarily get an answer to the movie’s title, but it’s apparent why we still need Nina today.