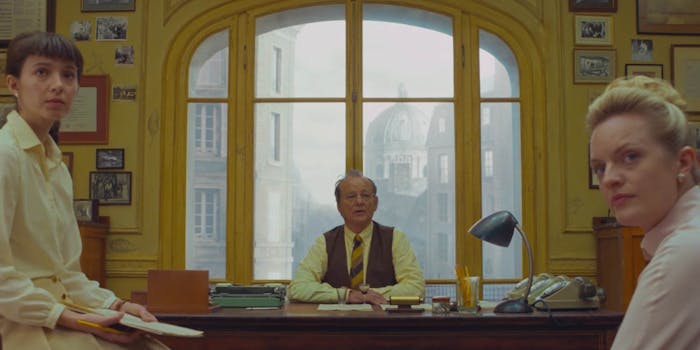 Wes Anderson fans are here for ‘The French Dispatch’ trailer

The film arrives in July

The first trailer for The French Dispatch, Wes Anderson’s new film that’s largely inspired by the New Yorker, is here, giving fans plenty to chew on.

The anthology film, which follows several journalists at an American magazine located in the fictional French city of Ennui-sur-Blasé as it publishes its final issue—and explores the story of those articles—is a blend of color and black-and-white and multiple aspect ratios in its depiction.

It’s colorful and whimsical as it gives us a window into a world compiled of Anderson’s regulars, which includes the likes of Bill Murray, Tilda Swinton, Owen Wilson, Adrien Brody, Willem Dafoe, and Jason Schwartzman. But there are also several entirely new faces fleshing out The French Dispatch that include Elisabeth Moss, Jeffrey Wright, and Timothée Chalamet.

Chalamet, who plays a student revolutionary, is particularly grabbing the internet’s attention, and it’s easy to see why. His over-the-top hair and mustache draw our eyes to him, although it’s arguable how good of a mustache it actually is.

But even if we know very little about The French Dispatch beyond the trailer and the New Yorker article, Anderson fans are mostly just happy to see another Wes Anderson film in theaters. (It’s been almost two years since the release of his last film, the divisive Isle of Dogs.)

The French Dispatch arrives in theaters this July.