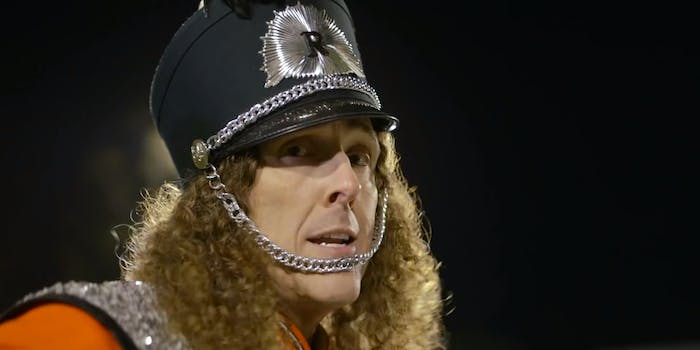 He's hotter than ever, and people want him on their television screens come February 1, 2015.

If thousands of fans had their way, they already know who they’d want to perform at next year’s Super Bowl Halftime Show.

Someone named Ed Ball started a petition on Change.org to get “Weird Al” Yankovic to headline the Super Bowl XLIX Halftime Show in Glendale, Ariz. after he overheard some people in a bar list off possibilities of who could possibly get the job and was dissatisfied with their answers.

In a state of inebriation, he wrote:

For decades Weird Al has entertained fans, young and old, with his popular clever parodies and unique sense of humor. Having him headline the Super Bowl XLIX Halftime Show. would not only be overly accepted by the millions of views, but it would remain true to the standards and quality of the show business we have come to love and respect out of this prestigious event. The songs of artists that he is parodying could join him on stage to accompany, as well as other surprise appearances from well-known actors/actresses, adding more prestige and star power. The theatrics alone would be hilarious and a welcoming change, and draw a wider audience of fans that typically would not tune into the championship game or half-time show.

Even though Ball later admitted that he made the petition while he was under the influence, he stressed that he would “get the same gratification seeing Weird Al perform at the Super Bowl even if I was sober.”

Fans have been trying to get the NFL to choose Yankovic for years. A number of petitions have already appeared on Change.org, with the most popular one getting 24,251 signatures in 2012. The movement gained media coverage, and Yankovic told TMZ that he would do the Halftime Show if the NFL asked.

The NFL went with Beyoncé instead.

Paul and Storm, a comedy music duo, announced that they were going to push for him to get it again after watching Bruno Mars perform at this year’s Super Bowl.

“Not only is [Yankovic] a genuine American icon, and not only has he continued to win new fans decade after decade, but he’s done so by being good, clean fun,” they wrote back in February. “To quote The Simpsons: ‘He who is tired of Weird Al is tired of life.’”

This time around, Yankovic is still fresh in our minds after debuting eight music videos over eight days for his 14th album, Mandatory Fun, giving him his first No. 1 debut and introducing him to a new generation of fans. He’s relevant, he’s still as beloved as ever, and to date more than 61,000 people want him to perform at next year’s Super Bowl, with many of us would opt to sit and watch instead of utilizing optimum bathroom opportunity while some non-football fans pledged to actually watch the Super Bowl if he does.

We’ve seen enough online petitions over the years to know that many of them are never addressed (or aren’t taken seriously), although Change.org petitions have had plenty of victories. And while Yankovic might be one of the biggest things on the Internet right now short of Chris Pratt’s media blitz and everything that came out of Comic-Con, that might mean nothing to the group of people who choose the Halftime Show performer every year. Plus, the ratings break records every year, so even if a few people boycott the game, it won’t affect a thing.

“We just got that phone call and [the NFL] started scoping me out,” Mars told Forbes in January about how he got the job. “They were coming to my shows, I guess, and they popped the question.”

Over the past couple decades, the NFL have chosen acts that are hot like Beyoncé or Mars, or they’ve gone with reliable acts who’ve been around for a long time like Bruce Springsteen, the Who, and Paul McCartney—more so with the latter group in the past 10 years after the wardrobe malfunction that stopped a nation in its tracks.

Right now, Yankovic is among that selection of being part of both groups. He’s been performing and churning out great hits consistently for more than 30 years, he’s family-friendly—he famously doesn’t swear, even when he lip synchs—, and now he’s a big enough commercial success (thanks to the Internet) that people might finally take notice. And with many artists considering it an honor to be parodied by Yankovic, he could bring some real star power that even the most casual listener of music may recognize.

We won’t learn who will get that coveted spot for a while, but he’s probably got his greatest chance of getting it.