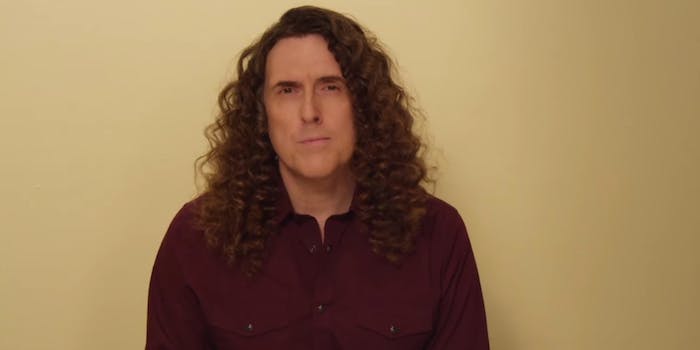 For eight days, “Weird Al” Yankovic took over the Internet. And now, for the first time in his career, he took over the Billboard Top 200.

His 14th album, Mandatory Fun, sold over 104,700 copies in its first week, sending him to the No. 1 spot on the Billboard 200, far exceeding Billboard’s expectations that it would sell roughly 70,000 to 75,000 copies. Before this, two of his previous albums, Straight Outta Lynwood and Apocalypse, hit the top 10. But this is the first comedy album to top the charts since Bob Newhart hit No. 1 in 1960.

Upon hearing the news, Yankovic sent out a flurry of tweets expressing gratitude for his fans.

I’m so pleased everybody is enjoying the album, and I’m enormously grateful for everyone’s support. Thank you, thank you, THANK YOU.

Over the past week, the Internet had witnessed an album marketing campaign like none other. With songs parodying Robin Thicke, Iggy Azalea, Lorde, and Crosby, Stills & Nash, Yankovic reached out to eight separate partners to foot the bill for his music videos after RCA refused to pay for them.

Yankovic wanted everyone to talk about his album for that first week, and with those videos gaining a swath of media attention and 10 million views apiece (and counting), it paid off.

Yankovic is leaving the record business at the top of his game. He’s been under contract since 1982, his record deal with RCA Records ends this year, and he’s said that Mandatory Fun is his last album.

But don’t say goodbye to Weird Al just yet. He plans to release more music in the future, though he says he plans to focus more on putting singles out on YouTube.

“I’m going to try to jump on new hits and new trends as soon as I can (with singles) and try to be a little more competitive with everybody else in the world on YouTube,” he told the Associated Press.

And now he’ll have an even bigger attentive audience watching.